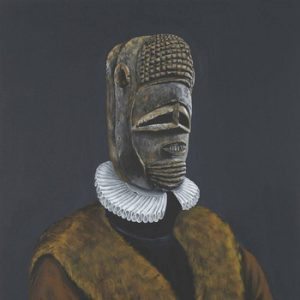 Vinyl is nowadays not a thing to be surprised of. But it’s not the only analogue echo from the past in opposition to digital editions. Cassettes exist and cassette labels like Erased Tapes are active in some musical corners of noise and abstract sounds. A French label, Hylé Tapes (meaning kind of ‘primary, raw material’ as a category of philosophy), started out with experimental ‘Hylé Tapes 001 : “Echo de Gradient”. This is an instrumental mix of 6 unique and standalone musical tracks. It is performed by JUJU, a duo of Richard Francés (Acid Fountain) and Adrien Kanter (Trésors, Le réveil des Tropiques), both settled in Paris.

A cover showing a human figure with a tribal mask on its face but dressed in medieval clothing reflects well what is inside the tape. This release is absolutely eclectic in sound. Side A begins with title track Echo de Gradient in Vangelis ‘L’Apocalypse des animaux’ mood. Drone at first, it becomes more cosmic with sci-fi flashes of sounds. From the fifth minute, a tribal drum beat invades into the music making it more rhythmically precise. On that smooth beat background the electronic echoes become more plastic and flexible. In the last few minutes is a piano sample ascending more to sound like a medieval harpsichord. A high contrast to this leisurely musical story is the diegetic-like piece called Trêve, lasting only 43 seconds. It flows into more drone notes of the next track, Terrance. This one is absolutely dysrhythmic and slowed down. Miles Limes sounds like a 90’s night clubs’ music at the start but it also slows down gently and becomes more synthetic.

Side B is captivating with its retrospective of the ’80s, with classic synthpop in Pas de Futurism. The melody, which starts gradually, is an 11 minutes-long journey in tranquilized thoughtful rhythm as a background to a variety of amazing sounds and effects. Acid and oriental motives come to mind while listening to last track, Miroirs. Reverberation of several parts within this long melody reminds me of multiple reflections in mirrors put opposite each other under different angles. The album doesn’t even stop, it softly decreases volume, leading to infinity.