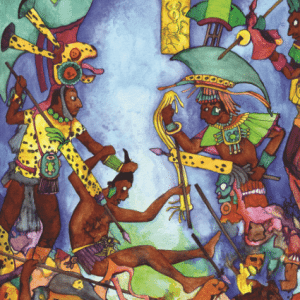 Volahn, the superb black metal band from Los Angeles, California, really fits the mold of raw, dark, and epic. Volahn belongs to the Black Twilight Circle, a collective of black metal artists from the West Coast of the United States. They are masters of the stygian raw kvlt metal and release some of the most anticipated and sought out albums in the USBM scene.

Eduardo Ramírez, the lead behind the project Volahn, has been putting out albums since 2008 under the name Volahn. Aq’ab’al is Volahan’s latest album and filled with explosion of epic indigenous black metal. Influenced by a native tones and mysticism, this album takes the listener to a world of pre-colonial South America. What I like about this album and also from the bands of the Black Twilight Circle is their unique approach to black metal. Volahn takes the lore from his ancestry and brings to light the tales of Aztec and Mayan mysticism. While Satan is a good medium for black metal, it seems to standard of a topic now. It is a welcoming change for US black metal bands to look into their own culture for tales of darkness and woe. Even the title, Aq’ab’al is from Mayan astrology meaning the darkness before the light. It represents a renewal and change. This album is a change from the repetitive themes and a renewal of what is to come from USBM.

From beginning to end the album is well done; exciting. Aq’ab’al encompasses dark and enchanting melodies. The album is a ritual in itself, with well written guitar and emotional Spanish lyrics. Most of the tracks are over 5 minutes, but the production and cadence of the music keeps the listener engaged. The album summons the spirits of the Jaguar Warriors and high priests of Mesoamerica, keeping the tradition of Volahn and the Black Twilight Circle. Who ever change and push to make great black metal albums.

Aq’ab’al is a album about a journey. A journey into the darkness which will result in an overwhelming enlightenment. Filled with a hedonistic ritual sound, which is both relevant and groundbreaking in a USBM album. I appreciate and welcome more music to come from the Black Twilight Circle.