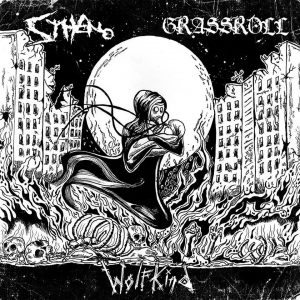 Released on November 11, 2014 via EveryDayHate

Splits are like the bread and butter of up-and-coming bands. And simply a good way for friends to get together and share some rage. Here we have two Greek bands coming together for just that reason on the split Wolfkind. Stheno hails out of Vólos and plays a brand of crusty black metal with plenty of grindcore and hardcore-punk influences. Grassroll, out of Piraeus, Attica, fire off with a more straight forward grindcore influence, with some sludgy bits thrown in.

If one were to wonder what Insect Warfare sounded like if they were noise, grind, power, death plus black metal, Stheno would be what they ended up sounding like. Though Stheno also sounds more polished in comparison. Regardless, Stheno bring four tracks of unbridled rage and ruin to their half of the split. With a small hymn introduction that quickly delves into a shooting gallery for the band, they waste little time in bringing out the blackened riffs.

Stheno’s strength lies in how well the blend genres without sounding like they rest on one solely as a crux for sound. Their delves into hardcore-punk realms on tracks like ‘Demons of Dust and Smoke’ are quickly transitioned into black metal and grindcore beats without the sound coming off like it’s over extending itself.

Grassroll, as mentioned earlier, is a more straightforward band. With female fronted vocals that bring to mind Kathrine Katz of Agoraphobic Nosebleed fame, Grassroll goes straight for speed and blasts for the most part. Their approach is un-dauntingly punk in both sound and attitude. Tracks like ‘Humanimal Sickening’ shove forward with circle pit aggression. However, the band most heavily dabbles on the grindcore side of things.

Grassroll is at their strongest when they sound like they’re on the fritz. ‘Carved Mortality’ is a track that only barely slows down throughout its first forty seconds. The band is utterly frenzied and only broken up by brief pauses. Though the ending of the song also speaks legions for the band. The sludgy bits provide ample killing ground as Annie’s voice annihilates.

Wolfkind is a good time. Both bands bring strong sounds and raw, caustic tracks. If you’re already into grindcore/hardcore-punk/crusty black metal, than this is something you’re going to want to check out. Both are intense as hell. Some look at splits as a sort of competition as to which band is better. Though I try not to do that, I can say that neither band is out performing the other. Wolfkind is aptly named. Though neither is an alpha over the other, both are deadly.