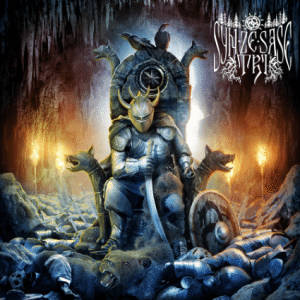 Syn Ze ?ase Tri are a Romanian melodic symphonic black metal band. Their name means I am with the triple six, from older mythology where 666 represents the limits between the human world and the gods. St?pîn Peste St?pîni, which translates to Lord over Lord (overlord), is the third and final album in a trilogy of albums about Dacian myths and legends. Thank you goes to my friend Celina for translating the song titles on the album.

The opening song on the album ‘Din Miez De Munte’, which translates to ‘From the Mountains Core’, begins with the drips of water as if we are in a cave, and proceeds to give us an atmospheric opening complete with a heartbeat and some choir chanting heard in the background. The nest song ‘Str?jerul Timpului’ (Times Guardian) begins with the symphony before the band takes over with heavy riffs and drum rolls before the symphony comes in to complete the heavy, but melodic sound heard throughout the album.

Each song on the album has their own sound and theme with the highlight being the track ‘Faurul Mun?ilor’ (Mountain’s Creator). The track opens with the sound of a blacksmith and the chink of metal on metal and this is heard all the way through the song. The beginning of the track features a very heavy grinding sound before out of nowhere, we get a rock stadium anthem almost as if Chinese Democracy era Guns N’ Roses complete with Axl Rose have gate crashed the recording, before the track goes back to the sound at the start.  This track sums up the album well as it is a good heavy melodic album where at times they bring in different elements to keep it sounding fresh even if at times they are unexpected.