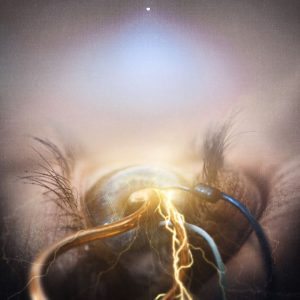 The Agonist are a Canadian metalcore band who formed in 2004. In 2007 they released their first album after being picked up by Century Media Records. They have since went on to complete two other albums, their last being the final one featuring Alissa White-Gluz on vocals who left to join Arch Enemy. Eye Of Providence, which is the fourth album now features Vicky Psarakis on vocals. Vicky Psarakis does an excellent job on her first album, singing both the clean and the guttural screaming vocals very well and is a very capable replacement.

The album begins with ‘Gates of Horn and Ivory’ and straight away we get screaming vocals to show the new singer can more than handle these parts of the song before she sings clean during the chorus showing her range. The guitars are at the forefront of the track with the drums being lower in the mix and this how things are all the way through the album, so it’s just as well the guitar work is stellar throughout. The sound is heavy but very melodic and features some very good guitar solos.

Eye Of Providence is a very good album that get things off to a great start for the new singer and the rest of the band.