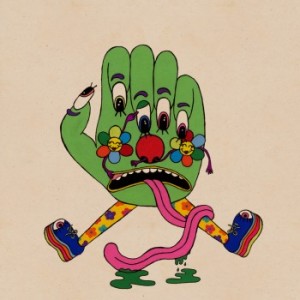 In the decade or so that Dan Deacon has been captivating audiences with his own brand of electro-pop-mayhem his music has evolved from the homemade aesthetic of 2007’s Spiderman of the Rings, to the more complex, heavily-produced Bromst and America – which itself was grand-scale electro-orchestral. Deacon has always been pushing himself forward with boundless enthusiasm and nary a nod to what is going on outside of his own sphere of influence. In Gliss Riffer he has regressed slightly, with the self-produced album more closely aligned to that groundbreaking breakthrough. This, it should be said, is no bad thing.

With more layers than puff pastry there’s more there’s a lot to listen to on any Dan Deacon album, and perhaps this album is a reaction to America‘s success. There’s more of a focus on that DIY ethic, less playing with strings, and heavier beats and samples. Not only is Deacon a classically-trained composer, he is to electronic music what Dr. Emmet Brown is to time travel, and that make his albums a whole lot of fun.

From the madcap beats and heavily distorted vocal on ‘Sheathed Wings’ to the soft comfort and heavily sampled ‘Meme Generator’, and the deeply personal ‘When I was Done Dying’, there’s a leap in styles that ensure the album is always screaming for your attention.

There’s a change in tone in the last three of the nine tracks – a comedown to what has passed. The melodies are more upbeat – ‘Learning to Relax’ is electropop played at 200% speed while the bold ‘Take it to the Max’ features the longest synth solo since that time Vangelis fell asleep on his Moog sometime in the early 80s.

Opening track ‘Feel the Lightning’ sees Deacon share vocal duties with a female voice that is warm and wistful.  Name checking Tom Petty and Johnny Depp, it’s a beautifully arranged piece with heartfelt lyrics. “I’m having visions, infinite visions / The same ones as you / I try not to worry, but I always worry / ‘Til all I can do / Is wish I could stay here, feeling forever / Before I must go / Wish we could change it to before we changed it / What did we know?”

It turns out that in a gender twist, both male and female vocals belong to Deacon. 99% of musicians would have brought in a session singer or a collaborate to record a vocal. That Deacon doesn’t, that he finds a way to warp his voice into something so uniformly different, is testament to his belief that music is science as much as it is art.