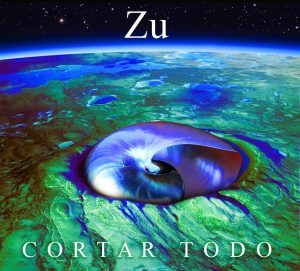 Released on March 23, 2015 via Ipecac Recordings

Well this I did not expect.

From past experience I believed Zu had two modes; one of experimental free-jazz (which I find rather forgettable and un-engaging), and another focused the pummelling rhythms of ‘math metal’ (best represented on their excellent 2009 album Carboniferous).

After a short (and slightly creepy) field recording, the album drops the listener into a bleak doom-scape of rumbling, crusty guitars and ominous saxophone drone. This sets the tone of Cortar Todo, where Zu’s polyrhythmic groove has been traded for grinding distortion, restless drumwork, and noise.

The production has changed remarkably too. Rather than the fat, warm sounds of Carboniferous, Cortar Todo is colder and more lo-fi. The drums come across as thin and under-produced, while the bass and occasional guitar parts are detuned and distorted to the extreme, featuring a tone that gives album something of a kitsch, 90s death metal feel.

The press release which accompanied the album claims it to be “more direct, sharp, focussed, and more intense and musical than anything we have heard from Zu so far.”

I wish I could agree.

On Carboniferous, Zu forged a sound and style completely unlike anything I had heard before. From the power of the bass-and-baritone sax played with a metal sensibility, to the catchy, technical grooves that dominate the song-writing, the album was a breath of fresh air.

Both in song-writing and style I am constantly reminded of Fantomas – from the damaged guitar and bass distortion, to the proto-typical metal drumming (supplied by Gabe Serbian of The Locust) and sporadic departures into noise mid-song. This is not a positive thing. Perhaps Zu find playing with dirty (and at times rather cheesy) metal a fun change to free-jazz, but to me it’s a reminder of the stifled and cliched music tastes of my youth.

I had hoped for something a little more innovative from Zu. To be sure there are a few genuinely promising moments – such as the black metal drone which ends ‘A Sky Burial’, and the sickening, lumbering doom of ‘Vantablack Vomitorium’ (which leaves me curious to hear Zu seriously take on the filthy, swampy doom of Buried At Sea) – but these moments are never capitalised on.

The underdeveloped feel of Cortar Todo may merely be a function of Zu’s penchant for improvisation, but my conclusion is inescapable.

Zu have fallen far short of the high water mark they set back in 2009.