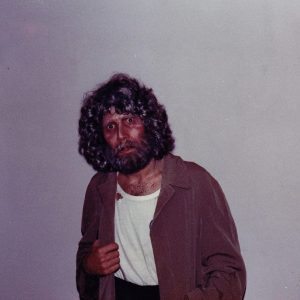 Released on March 27, 2015 via PopFrenzy Records

I first heard Alyx Dennison as one half of Sydney experimental pop duo kyü.

The day I stumbled across an early demo version of ‘Sunny In Splodges’ (released by the sadly defunct New Weird Australia) is still firmly etched in my mind. It was one of the more exciting pieces of music I had heard in some time, and helped to reinforce the idea that the depth of talent in Australian music remained profoundly untapped (and that, therefore, I was bound to try and help others discover the gems that were being quietly released).

My love for the group was cemented a few months later at the independent and wholly unique High And Dry Festival (which, too, is sorely missed). The two girls gave a gripping and dynamic performance using an array of synths, a floor tom, a looping pedal, and, of course, their voices. They left me speechless.

When their debut album was released through PopFrenzy the following year, it was greeted with high rotation on my stereo. Then things seemed to slow down; after a few higher profile shows, and a rather hushed follow up album, the duo parted ways.

It is therefore with great pleasure that I find Alyx has just released her debut album as a solo artist.

She has carried over many of the aspects which made kyü such an intriguing listen – a beautiful sense of space; a penchant for layering glitchy electronica atop soaring, reverb-soaked vocals; and a love of raw, minimalist percussion – but this she has paired with more mature and developed arrangements, alongside greater depth of instrumentation.

But it is still Alyx’s voice – stronger than ever – that carries the album. Her command of melody is stunning, with vocal lines that are interesting and ornate without sounding forced. Perhaps her secret talent is the ability to authentically communicate emotion; with the subtlest change she can express vulnerability or strength; sweetness or darkness; innocence or a wisdom far beyond her years – all without contrivance. (How many artists would kill for that knack!)

For instance; the albums opener – the sprawling, multi-part ‘Triptych’ – begins as a hushed and delicate meditation on death:

He said the art of living is to die well.
You should have seen it when he died well.
He said “When I’m dead I will have lived well.”
And and in death he last breath was to say “live well.”

And while there is sadness in the delivery of these words, there is also acceptance and wisdom – quite a complex and nuanced thing to communicate. From the opening verse Alyx moves into a Dhrupad-inspired chant whose flow seems to speak to the cyclical nature of existence, hinting that beneath the sweet voice and soothing melodies, much moves beneath the surface.

Lyrically the album touches on soft reflections of human intimacy, on death, on failed relationships, on frailty – but equally moves to celebrate the moments of love, peace and joy that offset the darkness. This sense of resolution might be a result of Alyx’s travels throughout India, speaking of a way of looking at the world that escapes banal self-pity, and instead seeks to unify experience, good and bad, into a whole.

Upon hearing this album I am a little taken aback at just how far Alyx’s music has developed in the last few years. I had seen her perform maybe three years ago in a Sydney warehouse, but this I did not quite expect. The songs have evolved far beyond what they were then, and are further helped by the tasteful production of David Trumpmanis, who enhances and strengthens Alyx’s music without leaving a noticeable mark – surely the signal of a good engineer.

It is a lovely thing to see musicians from Australia’s rich underground develop over the years. On her debut solo album, Alyx Dennison continues to broaden her palette while adding depth and confidence to the tools and techniques she already possessed. Her music escapes easy categorisation, but if you enjoy the likes of Bjork and Lamb, perhaps this will catch your ear. It’s certainly worth your time.

I look forward to seeing where Alyx takes us next.