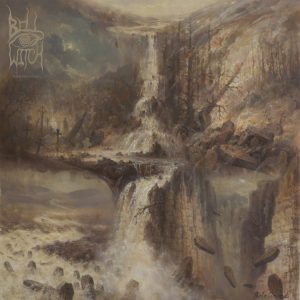 They’re so sad that when I saw them play live, the guy standing next to me, a big burly American I’d been having a perfectly cheery conversation with not 10 minutes before their set, started weeping inconsolably. Tears streaming, heaving shoulders, the whole lot. To be honest I wasn’t far off it myself…

Their previous LP Longing has since become one of my favourite albums of recent years, and I admit I was actually skeptical as to how they were going to outdo themselves. Thankfully Four Phantoms is an incredible record which, upon first listen, immediately allays any concerns.

Despite being comprised of just two members (Dylan Desmond on 6-string bass, Adrian Guerra on drums, with vocal duties split between the pair) Bell Witch have an extensive palette of sounds to draw from: their contrasting vocal styles, finger-tapped clean tones, speaker-destroying low end, and death knell drumming.

Opening track ‘Suffocation, A Burial: I – Awoken (Breathing Teeth)’ begins with all the solemnity of the ritual the genre is named for, the sparse notes of Desmond’s bass setting the mournful tone before a blast of drums and growls from Guerra blows away the cobwebs. It’s in the following passage that the diversity of Desmond’s playing is most apparent, as he switches from beautiful clean leads to cavernous low-end, as well as throwing some genre-staple string bends in to boot. Alternating between bouts of crushing distortion and plaintive lamentations, the track never loses momentum despite its 22-minute running time, due to the duo’s deft crafting of their sonic ghost stories.

Following track ‘Judgement, In Fire: I – Garden (Of Blooming Ash)’, while a comparatively brief 10-minutes long, feels like an eternity. Unfurling at an even slower pace than it’s predecessor, Guerra’s sporadic cymbal crashes are so far apart I would be surprised if the tempo was anything above 10bpm. They soon dispense of rhythm entirely, opting for a haze of shimmering cymbals, gentle bass motifs and gorgeously sung vocals which are so evocative, if you close your eyes, you can almost see the burnt fragments of a lost life slowly drift through the pale skies.

The preposterously none-more-doom titled ‘Suffocation, A Drowning: II – Somniloquy (The Distance Of Forever)’ is by far the standout track of the four. Much like ‘Rows (Of Endless Waves)’ from their previous LP, the addition of Erik Moggridge’s otherworldly voice to the track increases the ethereality exponentially, his sorrowful-yet-lilting cadence lending the song’s quieter sections an almost folkish edge. When Desmond finally lets rip on that six-string bass, it’s with such passion that you’d be hard pressed not to either well up, or go into full-on claws-to-the-sky mode.

When Desmond and Guerra lock in together, their combined sound with ‘just’ drums and bass is unimaginably huge, the devastating undulation of the mid-point of the track evidence enough of this. While their power as a duo is undeniable, it really is Moggridge’s contribution that makes this track so simultaneously cathartic and heartbreaking.

The final rite, ‘Judgement, In Air: II – Felled (In Howling Wind)’, tells the tale of the fourth Phantom in much the same manner as the others. Damned to suffer the final element for eternity, thankfully the listener need only endure another 11 minutes of doom. Though the album clocks in at barely over an hour, it manages to fly past despite the funereal tempo. Like the titular Four Phantoms, you’ll find yourself returning to these songs like old haunts, revisiting the torment again and again.

From the meticulously crafted music, to the incredible lyrical concepts, and even the beautiful cover artwork by master Paolo Girardi, Four Phantoms is a true work of art, and an album that sits firmly in the upper echelons (or should that be darkest depths?) of not just funeral doom, but of metal in general. A masterpiece.