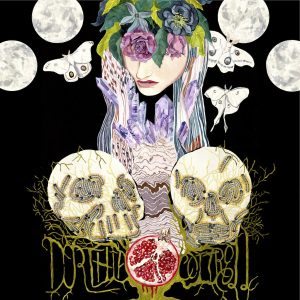 Released on March 1, 2015 via Forcefield Records

By now the amount of doom metal musicians professing their admiration for Townes Van Zandt and putting out a country record is getting out of hand. However, within this peculiar niche of the sub-genre, the debut solo album from Windhand vocalist Dorthia Cottrell is miles ahead of anything her contemporaries have released.

On her work with Windhand her voice can occasionally feel buried under the band’s colossal waves of distorted doom, but as you would hope for a solo record, her soulful tone is given its rightful place at the forefront of the mix here, with minimal adornment save for some light reverb. For those lucky enough to have seen her play live with Windhand and heard first-hand just how powerful her voice is, it will be especially sweet to finally hear it unencumbered.

The finger-picked opening notes of ‘Cemetery Song’ begin innocuously enough, and it’s only when Dorthia huskily breathes out the first lines in her inimitable voice that it becomes apparent just how special this album will be.

The running order is loosely chronological, with following track ‘Gold’ the oldest song of the collection. Written when Cottrell was just 18 years old, it’s a stunning exercise in just what can be done with a little heartache and a guitar. The accompanying strains of lap steel guitar, courtesy of sole outside contributor Kevin Wade Inge, serve to heighten the mournful quality. “I’m gonna break my heart here on this microphone,” sings Cottrell, effectively summing up her whole record in one perfect line.

‘Oak Grove’ continues in the same vein, a dark bluesy number that sees Dorthia sing of weak flesh, devil men and playing with fire in the huskiest of tones, while ‘Orphan Bird’ sees her voice full of longing, atop super-reverbed guitar tremolo and sitar-like twang. Tracks like ‘Kneeler’ and ‘Perennial’ allow her to demonstrate her finger-picking abilities with simple but effective motifs that underpin her voice wonderfully.

A decade in the writing, these deeply intimate songs have been given ample time to mature and develop before finally being committed to tape. The result is a collection of tracks that while sparse, nonetheless feel fully formed, solely down to the strength of Cottrell’s songwriting and vocal prowess. Despite the disparity of the timeline in which these songs were written, this feels like an album in the truest sense, not merely a collection of songs thrown together. There is a natural flow to the running order, and even the inclusion of the seemingly obligatory Van Zandt cover (Cottrell opts for ‘Rake’) feels appropriate, so effectively does she make it her own.

On her self-titled debut, Dorthia Cottrell is not merely another doomed soul moonlighting in morose country, but a fully fledged songwriter whose outstanding solo work has genuine crossover potential, and, if nurtured, may even eclipse her main band.