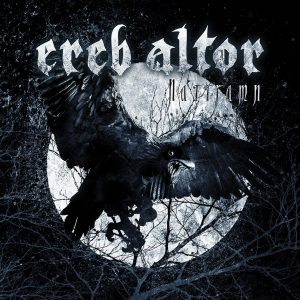 Nattramn is the 5th album by Swedish Viking metal band Ereb Altor. Founded in 2003 from members of doom metal band Isole, their Viking metal sound mixes elements of doom, black and power metal with stories of Scandinavian folklore and Norse Mythology. The band is heavily influenced by Bathory and aim to push their music to new epic levels with each release.

This brooding affair begins with the sound of drones and Viking war drums with chanting harmonies to set the scene. An intro to the epic sound of ‘Midsommarblot’, a full-sounding power metal track complete with choir-esque backing vocals. It has great hooks in the vocal melodies and warm guitar. The song talks of the Norseman’s hopes for the spring after a harsh winter. Ending with acoustic classical style guitar to give that olde world element.

Next up is title track ‘Nattramn’ where life gets heavier. This doom-filled black metal track has a crushing intro leading into a moment of reflection to prepare us for the evil that awaits. In Swedish folklore a Nattramn is an evil bird made from the soul of a dead child who was never baptised, which explains why it’s time to bring out the screaming vocals and fast dark riffs. The chilling synth sounds paint an uncertain urgency. The track ends with relentless screeching guitars and thudding drums, there is a sudden drop.

Now it can only be time for ‘The Dance of the Elves’. Soft acoustic guitar backs a single crooning voice. I only can imagine this voice to be an elf in twilight enticing a poor victim to dance with him for eternity. (Shit happens). The song bursts into life with chanting harmonies to back the melodic tones of this lonesome elf. A melodic power metal track with a hooky chorus complete with mysterious vocals of growling and whispering.

‘Dark Water’ begins with a soft violin sound in the distance and moves into another powerful doom intro crashing into a massive riff, not without melody. Heavy doom vocals speak of a creature that enchants victims with its violin only to try to drown them. The band’s notes tell me that if the creature is defeated the defeater will become the best violin player in the world and have fame and fortune. After the commotion of the harsh growling vocals and ripping guitars, the middle eight brings us into a false sense of security, with euphoric synchronised drums and clean vocals, only to throw us into the most head-splittingly heaviness on the album to conclude this epic dark track.

‘Across the Giants Blood’ is a clean vocal doom track with a powerful riff and melody. It is sung with joint vocals in a very Scandinavian style with a lot of feeling. With great atmosphere, you can imagine the Vikings rowing across the ocean to this one.

The final track, ‘Nemesis of Frej’, is a story of sections. The first is doom and clean voice similar to the previous track, but it suddenly cuts out to quiet twangs, only to bring us some serious aggressive black metal. Fast and ferocious, it reminds us that this band is totally adept at heavier moments, but then again this drops out to twangs, just to come back for one last blast of epic metal with their trusted choir-like harmonies.

Overall Nattramn is an epic sprawl of an album that takes you in many directions, but fuses its styles quite effortlessly.