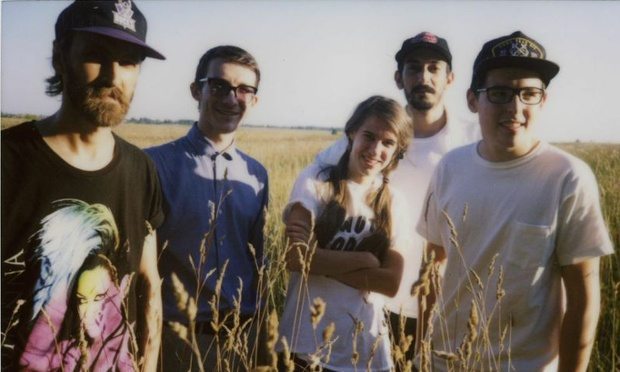 It’s probably fair to say that Cardiff was not looking or feeling it’s best when Pinshinyultrablast came to town. It was a wet and dreary evening and, a day before the general election, the people who descended up Clwb Ifor Bach were looking for a place of solace, a cradle of noise to sink into for respite from all the politics. Before we got to that though Welsh band Threatmantics had the job of warming the crowd up, which they did reasonably well. A 4 piece indie pop band with some folky leanings and a nice line in distorted violin histrionics, when they play things nice and straight they’re…decent I guess. But when they play rough, well, then they get a wild glint in their eye and things get interesting. Alternating in songs in Welsh and English (Super Furry Animals have a lot to answer for) the last couple of louder, wilder tracks they played in particular got a good reception from the crowd.

Then came young Aussie shoegazers Flyying Colours, playing their first gigs outside Australia. Doing so on the opposite side of the world must have been a little daunting but if they felt any nerves they didn’t show it. Though then again vocalist/chief noisemonger Brodie J Brümmer has such a jaded demeanour judging his emotional state is a bit like figuring out the inner workings of a particularly nonchalant house cat. Much like the evenings headliners they’re dedicated disciples of My Bloody Valentine – however for them the loud shimmering guitar noise isn’t so much an end in itself as it is raucous window dressing on some straight forward slacker indie pop. Which is no bad thing – catchy, deadpan, a little bit Sonic Youth, a little bit Dinosaur Jr, they’ve got an unassumingly excellent rhythm section underpinning the wild noise and second vocalist Gemma O’Connor adds some delicate melody to Brümmer’s monotone vocals and searing guitar abuse.

It’s not often you get to say you’re off to watch some Russian shoegaze to people. It sounds like an oddly exotic proposition despite the majority of their influences coming from nowhere more romantic than the Thames Valley. It’s hardly controversial to state that the shadow of Kevin Shield’s lot hangs heavy over them and it’s impossible to hear singer Lyubov’s subtly dramatic, ethereal vocals without thinking of the Cocteau Twins. They do bring some interesting twists to the formula however, augmenting their thick, hazy noise with some post-punk grooves and electronica beats. They’re not content to merely erect a cathedral of sound like most shoegaze revivalists – instead they want to install a glitter ball and a light up dance floor in there to liven things up.

Which is enough to stir the crowd into action rather than stand in eyes closed reverie or staring into infinity. Playing songs mostly from their rather delightful 2015 record Everything Else Matters there’s not a great deal of variety on offer, and all the swirling delay and reverb their create does have an unfortunate tendency to coalesce into an indiscernible sonic mulch towards the end of their songs. But the ascent and thrilling initial moments after we reach the peak of their dreamy fuzz mountains are uniformly worth these minor downsides – the combination of Slowdive-esque waves of guitar noise, hook laden synth melodies and utterly beguiling vocals atop irresistible rhythms is undeniably potent. They don’t speak throughout the set and then almost out of nowhere, with a quick thank you and a charming, “your country is beautiful,” the crowd are rudely awoken to reality.

Then it’s back out into the bleak evening and the (at that point unforeseen) impending electoral doom of the election. Pinkshinyultrablast may have taken the crowd to familiar territories, but they did so with such aplomb and rhythmic verve they make them feel almost new again. And I think if you asked anyone stepping into the streets of Cardiff if they’d like to go back there I have a feeling they’d have said yes without a moments hesitation.