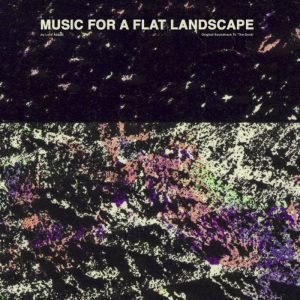 Luke Abbott has been one of the leading lights in electronic music since the amazing Holkham Drones was released. Like fellow visionaries, James Holden & Nathan Fake, Abbott seems never content to stick to formulas and is always leaning to the experimental. Music For A Flat Landscape is his first film score, composed for the film The Goob by director Guy Myhill who also hails from Abbotts’ home of Norfolk. It also will be the first release on the label set up by Abbott called Buffalo Temple.

The music is much more ambient than his debut or last years excellent Wysing Forest. However, it’s still very affecting and engaging. It has a spacious quality and a meditative tone which makes for an intense listen. Set in rural England, The Goob is a coming of age tale about a teenager and his relationship with his mother and seemingly malicious boyfriend. To be honest though I had started listening to the soundtrack before I had any idea what the film was about. I had a reoccurring feeling of summers I spent when young in the country and the ever present smell of scorched wood and foliage. After watching The Goob trailer I can see that that not may make sense in some of the settings.

The album opens with the hypnotic ‘Ascending Spirals’, an absolutely glorious track that ebbs slowly into a overwhelming mix of chimes and atmospherics. A sense of exhilaration early in the album on tracks like the infectious ‘Night Bike’ is replaced by a growing feeling of unease and trepidation. ‘Night Bike’ is probably the most immediate of tracks here with its repetitive rhythm and swells of synths. There still isn’t any beats as such used on it but it’s easy to forget given its momentum.

Luke Abbott has resisted the popular or generic approach to soundtracks and stayed true to his own output. Everything feels organic and pulsating, the album coming across like a mutating organism that adapts to the environment around it. Sounds are very natural and influenced by nature itself, wind rushing through long grass or whistling through trees. There are elements throughout of chimes and bells and the constant ebbing like a river running through the countryside. There are field recordings of birds and even farm animals lending to the “outdoors” feeling.

Music For A Flat Landscape is a unique and absorbing film score to be enjoyed easily with or without the accompanying film. Personally I’ll be checking The Goob out as soon as possible however.