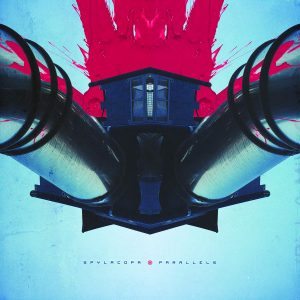 Supergroups, usually a term coined to describe a collaboration of musicians from semi well-known bands. With Spylacopa this certainly rings true, because the who’s who in cutting edge post-rock/metal partake in this project. With (former) members from Isis, Made Out Of Babies, Candiria and Palms being involved the “supergroup” tag is entirely justified. Let’s see what Parallels, the fruit of their collective labour, has to offer.

This is one of those albums with a sad back story attached to it, because it features the last recordings of drummer Troy Young, who was killed shortly before his 30th birthday in an attempted robbery at his Brooklyn-based apartment. In many ways Parallels is meant as a tribute to a very talented drummer who passed away in very tragic circumstances way before his time. And what a fitting and soul-stirring tribute this is.

The abundance of musical talent aboard becomes paramount with the opening seconds of ‘Hexes’, a song that can best be described as the bastard love child of Tool, Intronaut and Isis, supplemented with Alice In Chains-styled vocals by guitarist/vocalist/producer John LaMacchia. The song may be a tad on the weird side first, but when it clicks it will stick in your head forever. Same goes for ‘Handmade Flaws’, which features Julie Christmas (Made Out Of Babies) on lead vocals. ‘Betrayer’ and ‘Insolent’ have this really sinister latter day Isis-vibe going on, while ‘Troy’ sees the band exploring their earlier mentioned Tool meets Isis direction again, nailed against a hauntingly beautiful backdrop of lush textures akin to the Palms début album.

The most commendable feat on this album is just the perfect balance between technicality, song writing skills and atmosphere. The vocals sung by John LaMacchia and especially Julie Christmas may come across as a bit awkward at first, but they fit this type of music as the proverbial glove. It even gives Parallels an off-kilter, almost avant-garde type of charm.

Parallels by Spylacopa is undoubtedly not everyone’s cup of tea and it’s quite demanding in its bearing. However, when you give this record a chance it will grow on you like fungus in the wet season. Heartily recommended for listeners who are into Intronaut, Tool, Isis and like-minded bands and as stated before, a brilliant epitaph for someone who passed away way too young.