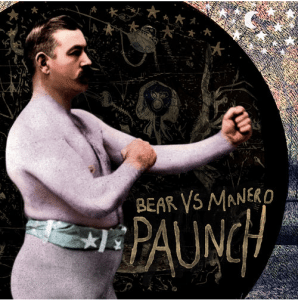 Bear vs Manero are a band that don’t give a shit…in the best possible way. Paunch is raw, feral and powerfully uncompromising; though far from careless, this is an album that sounds like it was conceived in the midst of some reckless debauchery. As debut albums go, this is a stunningly accomplished statement of intent that builds on the band’s previous releases.

Live, Bear vs Manero oscillate wildly between chaos and the sublime. They have managed to translate this unnerving energy to Paunch which explodes, implodes and thunders relentlessly before shuddering to a stop. Its bristles with energy like a wire carrying too much current.

‘Bonjour Bonnet’, the first single from the album, is the highlight; a shot of adrenaline straight into the inner ear that sounds like David Byrne and a Banshee singing along to a Big Black/Queens of the Stone Age mash-up. It’s a savage song that captures the band’s power and attention to structure. ‘Infinite Apples’ mixes ferocious speed with lumbering brutality as Dan Toms expounds like a demonic wizard in full flight from reality.

Other highlights include ‘YRANYRBYR’ (Your Rights Are Not Your Rights Because Your Wrong) which seems to be directed at whimpering Guardian-readers everywhere. ‘Brazilian Snooker’ – which sadly has nothing whatsoever to do with snooker in Brazil – is doom-laden and menacing, the kind of track David Lynch might build a murder around; “Speak Not Her Name” rings out ominously throughout. ‘Water Sheep’ sounds like hallucinogen-fuelled breakdown feels; a captivating decent into madness.

With Paunch – released through Skingasm Records – Bear vs Manero have managed to achieve the enviable feat of triggering memories of all that’s good about music without being derivative; it’s fabulously original and a very modern take on the perennial need to howl against orthodoxy. In an era when the obscene has become the norm, the sane minority can take the piss or scream; Bear vs Manero do both.