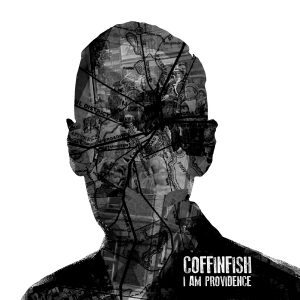 With some records, particularly from bands working in a crowded genre of similar sounding artists, you need a key, a way in to reveal what’s really going on. This may sound like an admission of laziness coming from a reviewer but often-times you hear the same hallmarks in so many records in succession it’s difficult not to become jaded, to mentally file something as ‘nice but too generic’ and move on. In the case of Coffinfish‘s I Am Providence the key for me came at around 6 minutes and 45 seconds into the albums centrepiece ‘Watchers’. Until then I was fairly sure I was listening to some serviceable if unspectacular post-metal, labouring as many bands labelled as such do in the long shadows of Isis and Neurosis.

Instrumental opening track ‘Zadok Alien’ had come and gone without much notice being paid, and whilst a few of the Lateralus-era Tool influenced awkward riffing passages had caught my ear on ‘The Expedition’ its 9 minute run time drifted by with similarly little impression being left. The only thing I’d really noted was the organ – not entirely unusual in a post-metal album (Isis themselves were fond of using one), but the tone sounded a little more…sinister. Perhaps I’d been influenced by Coffinfish’s or being heavily influenced by Lovecraft and expected to hear something suitably malevolent.

Then, after a long patient build up wherein said organ flutters away like it’s wandered in from a forgotten Hawkwind jam, ‘Watchers’ drops out to leave the sound of a gathering storm and hurried, desperate breathing. After a few unnerving moments the song returns, picking up where it left off with some hypnotic nodding rhythm, only with some ominous rumbling cracks emanating from somewhere deep in the mix, sounding like distant thunder or, following the Lovecraft theme, the horrible rumbling beneath the earth that the residents of Dunwich reported before they were terrorised by the titular Dunwich Horror, as if something primeval is trying to escape from the crust of the earth.

Then comes the songs crescendo – each moment it seems to have reached its peak it manages to push itself that little bit higher and get that much more insistent. That same incessant riff continues like waves hammering against a cliff face whilst the lead guitar wanders off into the kind of post-rock soaring that sounds like it’s tumbled out of a Mono record. Then the song seems to come apart at the seams, scattering before reforming itself for a well-earned victory lap, the lead reprising the melody from the songs peak while the backing wanders in a less intense directions. It’s an exhilarating few minutes, the kind of moment many bands of this ilk spend their whole careers aiming for and falling short of.

After that the songs I’d pretty much written off as standard fare sounded changed on relistens. ‘Zadok Aliens’ may not have sounded much more remarkable – though organ stands out, not just there for texture like they are by less imaginative bands, instead allowed it’s own personality which brings a more foreboding edge, complementing the sound of crashing waves beneath the mechanical riffing. ‘The Expedition’ may start like just-another-post-metal song but it’s filled with grooves seem more geared to inspire a pit than to set off the stroking of chins. There is something more muscular and dynamic at play than first realised – they’re not content to drift or get too bogged down in meandering passages.

After ‘Watchers’ comes ‘Against Life’, presumably titled for Michel Houellebecq’s book on Lovecraft Against the World, Against Life, which features 2 of the most sombre moments of the record. First there’s the grimly pretty piano that acts as a prelude to the chaos – the song bursts in at unexpected pace and grinds away in a manner reminiscent of Cave-in/Old Man Gloom side project Zozobra. It’s simultaneously the most straight-up heavy song here and the most melancholic. 4 minutes the piano returns as the song fades into a quiet section and then remains while they build a wah-powered riff monster, colouring the metal heft with sad sepia hues. They loosen up into what sounds almost like an improvised jam ending – something usually anathema to the cold, mechanical structures their genre demands, but which suits Coffinfish handsomely.

The album is seen out by the 12 minutes of ‘Staring into the Abyss’, also the title of their ocean disaster themed EP from last year. The organ and guitar work to give something of a sinking feeling from the off. When the hammer inevitably falls it’s dead set on consuming the listener with it’s ever creeping intensity. The organ works to add a level of queasy unease that ratchets up the feeling of dread in these songs; throughout the many passages of ‘Abyss’ it’s an ever looming presence. It’s a song full of ideas that doesn’t quite come together as well as the tracks that precede it but conversely also shows that they’re a band with many more tricks up their sleeve than you might assume.

The quintessential Lovecraft happening is of course the moment the protagonist sees the world as it really is and becomes suddenly and horrifying aware of mankind’s insignificance in the grand scheme of things. My revelation during ‘Watcher’ wasn’t quite that dramatic, but it shed light on the myriad details that set Coffinfish apart from their peers, and revealed that their best moments are at once beautiful and terrible enough to have been torn from pages of the Necronomicon itself.