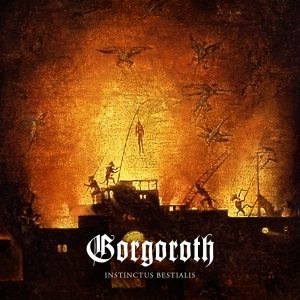 Released on June 8, 2015 via Soulseller Records

Gorgoroth need no introduction amongst the ranks of black metal. The legendary unit has been one of the biggest staples of the Norwegian scene since the early nineties. Their first two releases, Pentagram and Antichrist, are classics in their own right and are some of the finest examples of the genre.

The arrival of Instinctus Bestialis seems like a millennium in the running. Though Infernus has been running his unit for well over two decades now, the band has remained more prolific in its plethora of line-up changes and onstage antics perhaps than any one particular album. Ask the ranks of black metal fans which album they prefer and you’re likely to conjure up one of the first three albums (Pentagram, Antichrist, or Under the Sign of Hell). Though there’s been speculation on the band’s quality control post Under the Sign of Hell, I’ll be the first to defend the introductions of King ov Hell on bass and the mighty Ghaal on vocals and the thundering beast that was Ad Majorem Sathanas Gloriam. Then again, after what I’m sure was a splitting headache legal battle over the band name and the three members mentioned here, there’s certainly something about Gorgoroth that is different. And yet not at all.

If there’s speculation amongst any of the readers as to what’s the best and what’s the worst Gorgoroth album, I assure you I cannot assert the earlier with any certainty. I can assert the later though. Instinctus Bestialis throws together not only the most forgettable Gorgoroth tunes, but also inadvertently snuffs any viciousness the band once held. If you hated the re-recording of Under the Sign of Hell because it seemed: a.) pointless, or b.) regurgitated, well, just be glad that Infernus and company at least had the courtesy to revisit a classic album.

Sure the opener ‘Radix Malorum’ has what you might expect from a Gorgoroth album; that immediate punch like it’s getting right down to business. The driving double bass, the building guitar lead, the hailing of Satan—hell, this is exactly what you’d expect out of a Gorgoroth album. The songs don’t get any better than ‘Radix Malorum’ though. In fact, if there’s one thing Gorgoroth are immediately guilty of, it’s an unwillingness to explore. Call it more kvlt for remaining true to form if you must. That’d be fine if there were a moment of interesting music to be had here.

The thing with Gorgoroth is that they only have to top one black metal act: themselves. And they’re not about to do that here. Instictus Bestialis travels down an already too familiar path. Everything recorded on this album sounds like a b-side to Gorgoroth‘s b-sides. The guitar leads are there, but inspire and imprint nothing to memory. They happen, we move on. The Satanic chants are old hat despite that being one of the band’s strongest gimmicks. The melodic sections are slow and the album trudges between chuga-chug riffs and moderato tempo.

If there’s anything that might please fans on an odd level, it’s that the vocals of Atterigner are at their most understandable on Instinctus Bestialis. With how persistent Infernus is about keeping their lyrical incantations a secret, one would think he’d practically be hitting a distortion pedal just to cover up these up.

Beyond this, Instinctus Bestialis drives nothing home. Gorgoroth are getting off more on name with this album than execution and when you have a back catalog has illustrious as theirs, it both stirs attention and brings the glaring issues more to the surface. Unfortunately, everything boils down to “been there, heard that.”

There are a multitude of problems on Instictus Bestialis. Its production quality is bland enough to make white bread seem exciting. It’s oddly clean feeling and smooths a lot of the edges on songs that should have a much sharper bite. Then again, there isn’t anything great about the composition either. Every song sounds tired and uninspired. I appreciate that Infernus and Gorgoroth are pushing forward with the project but what threat the band once posed is now being served with diminishing returns. It’s a shame that something that once seemed so intimidating has become passé.