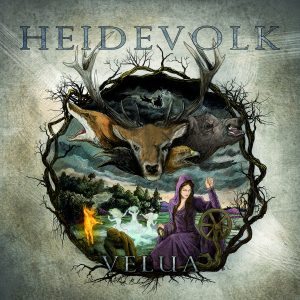 Heidevolk are a Dutch folk metal band, who sing their songs in Dutch. Velua is their fifth full-length release since they began in 2002. The album starts with the lead single ‘Winter Woede’, which translates to winter rage and tells the story of soldiers returning from war and becoming bandits that raid from travelling merchants.

‘Winter Woede’ kicks off heavy before it speeds up leading to the vocals, which begin as a chorus and slows the song down before growling vocals that lead to the rhythm speeding up again. This is how the song is laid out until we get more than half way through when the song breaks down with choral oohs prominent as the song builds to a rousing climax.

This leads nicely on to the next song ‘Herboren in Vlammen’ (Reborn in Flames), which  follows the same template as the first song with rhythm and tempo changes keeping things interesting along with the choral singing contrasting with the more heavy grinding vocals.

With this album you know what you are getting throughout. Standout tracks include ‘Drinkgelag’ (Drinking Bout), which opens with the sound of a bar, before it descents into a folk metal drinking song, that leads onto ‘Velua’, the title track, which tells the story of the hardworking people that feature throughout the album. You can just imagine being in a pub with a beer singing along with others to these songs.

This pretty much sums the album up as it is a rousing and uplifting slice of folk metal that is great fun. It is an album that I nod my head to and would be singing along with if I knew Dutch and if you do not know any then give it a chance as it is an easy album to listen to and enjoy.