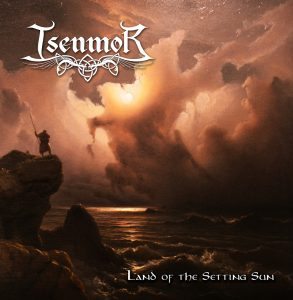 Land of the Setting Sun is the debut EP by folk metal band Isenmor from Maryland U.S.A. The band boasts an impressive duel fiddle combo set to fiery riffs. Inspired by European pagan and Viking folk metal bands such as Eluveitie, Heidevolk and Ensiferum, they sit at the more melodic end of the spectrum with a strong celtic connection. This 5 track EP deals with those trusted folk metal scenarios such as battles, crossing the seas, glory and drinking beer.

The EP opens up with ‘Death is a Fine Companion’. The intro being a fine Irish style jig with our duelling fiddle backed by thundering drums and screaming. As the commotion pans out we hear a “Huh!” (from the hip, like James Brown). The song bursts into furiously fast black metal with vocals to match. The speed of the fiddles on the verse give a sense of urgency leading into a big gang vocal chorus with a catchy hook. The general theme of the song is about dying with honour and includes a rousing middle eight with a speech suggesting, “there is one thing which never dies: glory to the man who can achieve it”, taken from Norse poetry. The song pulls together with some neat fiddle playing and dynamic drumming.

Next track ‘Pyre’ is a more stomping but sorrowful affair, sung with clean vocal harmonies on the verse with growling vocals later. The violins are played with more sensitivity now, as this song explains that some of our previous battling heroes may not have made it back home in one piece. Poignant images of mourning on cliff tops to follow.

Title track ‘Land of the Setting Sun’ has crunching guitars and swirling violin lines. The luxury of two violins is that it gives a real richness to their sound and must give their live shows some added panache. This song speaks of our warriors at sea searching for new lands with the added melancholy of never seeing their homeland again. Isenmor seem to have a skill for depicting ‘the struggle’ in their music. This song has some heavy moments of black metal wrapped up in sincere harmonic folk music.

Next up the melancholy continues with ‘So willingly Deceived.’ The piano intro sets the scene with sweet harmonised fiddles leading us into an epic metal ballad. Sung in a clean vocal with an obscure accent (something between Swedish and English West Country), this song talks of trying and failing to deceive the gods. I’m not sure if this song is actually sung from the god’s perspective but I do hope it is.

The final track ‘The Old Mead Hall’ is a flat out raucous drinking and dancing song with crazy fiddles playing over chanting vocals that tell us to “drink the drink of the gods”, with added growl on the chorus. The song contains some stunning violin solos showing us just how much quality is going on in the playing. It’s also a fun way to end the record; I guess the warriors needed to let their hair down.

Isenmor’s sound might be a bit lighter than some of their European counterparts, but it’s definitely unique and full of energy. It also comes across on the record that the band enjoyed playing these songs in the studio. This is an excellent EP which will hopefully lead Isenmor on to record a great folk metal album.