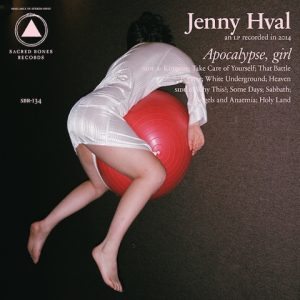 Where do I begin with this, Jenny Hval’s Sacred Bones debut? On first listen it is very apparent that she has found a more than suitable home for her art with Sacred Bones, also that she has taken influence from recent touring mates Swans, most notably the intensity of album closer and my personal favourite, ‘Holy Land’, and channelled it in her own very articulate, intensely personal and fraught way.

The songs on Apocalypse, Girl are about sexuality, self loathing, self care and mortality, first song to be released to the public from the album ‘That Battle Is Over’ is a pretty fine representation of the tone of this body of work. Her vocal delivery flits between whispered spoken monologs and beautifully sung passages, gone are the sparse arrangements of previous collaboration record Meshes of Voice, instead these are lush synth soundscapes that are steeped in eerie and at times unsettling ambience.

It’s hard to put Jenny Hval into any genre or place, she occupies a space that is entirely her own, sure, label mate Margaret Chardiet (Pharmakon) shares a similar provocative vision but channels it in a different way and mainstream darlings such as St Vincent share her avant garde sensibilities but here it is very apparent that Hval wrote and recorded these pieces without a second thought to what plaudits this set of songs may bring her.

If I were to make comparisons to other artists, I would have to say that I am reminded of the off kilter sense of melody in Scott Walker’s later work on Take Care of Yourself and of the claustrophobic desperation in Beth Gibbons delivery on Angels And Anaemia.

People may say that Jenny Hval is pretentious but I have to disagree, I think that she is doing things entirely on her own terms and in the process is exorcising something within herself. Apocalypse, Girl is a focused and challenging listen and one that I highly recommend giving your time to.