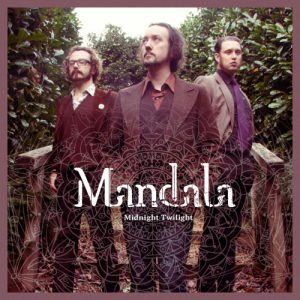 Released on May 4, 2015 via Autumnsongs Records

This record is something of a time capsule, or a cryogenically frozen Han Solo – what we have in Midnight Twilight are ten tracks written and performed by the band between 1997 and 2005 but thawed out and freshly recorded in 2014 after a 9-year hiatus. Rhys Marsh (voice, guitar), Francis Booth (bass) and Will Spurling (drums) who collectively make up Mandala kicked this all off back in 1997. You remember 1997 don’t you? OK Computer, Urban Hymns, Ladies and Gentlemen We Are Floating in Space? Yes, THAT 1997.

That they are only now releasing their debut album, some 18 years later, may come as a surprise to some; perhaps the world wasn’t ready for Mandala at the turn of the century but are we ready for them now?

If anything, you have to admire them for their patience, most bands after calling it a day would have long given up and gone, well, who knows where. But stick with it they have, and the Mandala sound, generally speaking, falls into that wide and much abused category of radio-friendly Classic Rock. The whole record generally follows all the Classic Rock tropes – which isn’t to say it’s bad – the song writing and musicianship here are second to none, top notch in fact, but the record does feel as if it plays it safe.  ‘There’s a Wind That Blows’, starts off in a doomy, Sabbath-y mode before we’re plunged into waltz-time for, appropriately, ‘The Dark Waltz’, next launching into the pumped-up, confident rock of ‘Into the Night’ – so far, so orthodox.

Where things really come alive are on songs such as ‘Sun’, ‘Ghizou’, and ‘Fire is Mine’; here you get a real sense of a band trying to push at convention and igniting the engines, drawing you into something thrilling which perhaps is lacking elsewhere.

The title track ‘Midnight Twilight’ leads us into progressive Middle-Eastern territory before launching into the hypnotic scorch-rock of ‘Sun’ – all ethnic strings and fuzz-guitar. If anything, I’d have liked more experimental nods in this direction throughout this record, perhaps exploring that lost and deserted mountain path a little further. The album is cleverly soaked in the imagery of the night, a place of shadows, where flames from fires or candles play with your imagination. Subtle use is made of effects and a string section which give many of the tracks here a lush, ethnic, eerie, feel.  It’s nocturnal music to be played around the fire, as you pass the hookah around and tell tales of the souks of old Marrakesh.

As a polished power trio, the group are hard to fault. Marsh’s voice is to die for, particularly on songs like ‘Sun’, ‘Fire is Mine’, and ‘Into the Night’, his confident baritone soaring above each track like an eagle on a thermal over a Bedouin haunted desert. Booth and Spurling provide a solid rhythmic unit, sometimes playing at you distantly as you squint over a sun-bleached horizon, sometimes directly, as the waves of a musical sand-storm blast at your ears. Here is a band that is fully in control of what they can do with their instruments, conjuring loud or quiet dynamics as one really tight unit.

In a nutshell Midnight Twilight is a strong if conventional debut. I hope Mandala don’t leave it as long before the next one; I just hope they can take a few more risks.