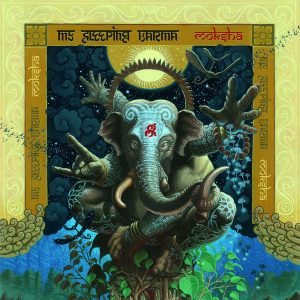 My Sleeping Karma’s music has always, in the past, made me think of a room, maybe even a flat, filled with big cushions, long-haired students and clouds of fragrant smoke1. A peaceful picture, happy grins and nodding heads. Maybe a brass statuette of Ganesha on a low table, next to the ashtray.

Moksha2, My Sleeping Karma’s latest album, 3 years after the last, does little, at first, to dislodge this little scene from my head. Opener ‘Prithvi’3  leads off with a classic hazy hypno-riff, repetitive but never dull, driven along by pulsing rubbery bass, metronomic drums and the occasional swell of Hawkwindy space-organ. It’s all exactly as it should be, and it’s just grand. A psychedelic jam to satisfy any long term fan.

And so it goes.

I’ll skip the ‘Interludes’ if you don’t mind. They’re interesting little snippets, and they serve nicely to glue the whole album together. They’re there, and the album would be lesser without them, but let’s leave it at that.

The next song proper, ‘Vayu’4, continues through well explored territory, taking a little longer this time to get to the central riff, and concluding rather oddly with a little coda straight from a ghostly fairground sideshow. Apart from that, it’s all exactly as you might expect, nothing new.

And on. ‘Akasha’5 looks to be heading down the same path. Which is fine. Really. But wait, somewhere along the way the atmosphere seems to have changed, almost imperceptibly. There are passages between the riffs which feel… more airy somehow. It’s as if somebody – probably your landlady – has come into the room when you were out at the corner shop stocking up on Doritos and generic rolling papers and has opened a window. Let some fresh air in.

To be fair, my previous experience of My Sleeping Karma is limited to the first 2 albums, so maybe I’ve missed that evolution. Maybe it’s been happening all the time, and I didn’t see it. Maybe I should check. Maybe I will. Later.

‘Moksha’6, the title song. Something of a sprawling epic, it seems to further sidestep the more obvious Eastern influences, starting as it does with a Mogwai-esque piano riff and introducing a cheeky wee bit of violin while it meanders dreamily along. And then it goes full-on Kyuss. For a bit. The song ebbs and flows for its full nearly-ten-minute length, incorporating bits and pieces of post-rock, prog and stoner metal, ducking in and out of the main theme. To be honest, I’m not sure if it works. Some of the passages plod a bit, and it goes on too long. Perhaps I need one of those ‘herbal’ cigarettes.

The last two songs, ‘Jalam’7 and ‘Agni’8, are more traditional My Sleeping Karma material, with their heady, hypnotic riffing guaranteed, I reckon, to satisfy hardened fans. There’s still that new -to me – breath of fresh air which goes a long way towards avoiding staleness, but otherwise there’s nothing new enough here to change the minds of doubters. Maybe it’s enough to just close one’s eyes and let the pulse of the music do its work. Somehow, though, I think that work would be easier if the listener was in a certain…er…relaxed state of mind but, sadly perhaps, that kind of relaxation is no longer one of my vices.