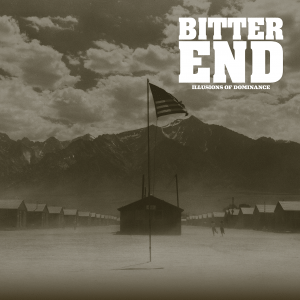 I got into hardcore the traditional way via the likes of Black Flag and Minor Threat, but a lot later in life than your traditional hardcore kid. I came from the more metal side of things and started off with the 2000’s nu-metal craze, which is where it all started for me as a 10 year old and I started to go deeper and deeper down the rabbit hole, looking for the next extreme, which got me into death metal, black metal, thrash metal and eventually punk and hardcore.

It’s all about remembering your roots, but enough about that, Bitter End have a new record and in a year where I’ve been on and off music as I try and forge my professional career, this release was definitely something to look forward to.

The metallic hardcore outfit from San Antonio, Texas, whom are heavy influenced by the NYHC style of the 80’s and 90’s -such as Merauder and the like – was first introduced to me by their somewhat legendary album titled Guilty As Charged, which was a phenomenal release that bottled up anger, anxiety and just every social political issue that troubles any young adult today. Coming off this release, I was pumped up for the follow up.

Bitter End’s 4th release titled Illusions of Dominance was released on the 30th of June via Deathwish Inc. and produced by Nick Jet (of Terror fame). I listened to the record a few times in various bursts over the last 3 weeks and it seems to capture a lot of the essence of the sound that one would expect from Bitter End, but to an extent I feel that it has a lot of progression to it from a soundscape perspective with very heavy metal-like leads, which goes well with the mid-tempo battery. They of course don’t stray to far from the hardcore side of things with some epic breakdowns strategically placed throughout to give it that signature Bitter End feel, some might say “hammer coming down with overwhelming force”.

The record as a whole does that hybrid metal/hardcore feel to it, but I do feel that this release tends to lean more towards the metal side of things, which is by no means a bad thing. It is a bit less intense than it’s predecessor, less abrasive, but just as heavy and lethal in its own right. It’s a well rounded record with a solo here and there, which is pretty rad to top it all off. Solid effort from the boys out of Texas and definitely something to get your hands on.