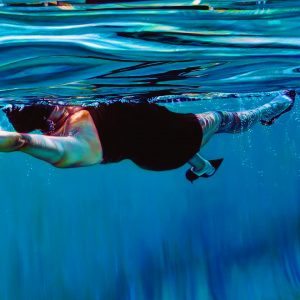 If someone was describing who Lee Bannon was to me, I’d be a bit sceptical. A mainstream rap producer who released a drum n bass lp last year and now has now gone “ambient”. Then add to that his recent name change to the symbol “¬ b” and I’d be inclined to think Bannon was someone who fleeted between genres as trends changed. As it is I’d be hugely judgemental and wrong, as Lee Bannon is simply a fucking boss, capable of tearing up the rule book and turning his hand and production skills to whatever feels right to him.

Said drum n bass album Alternate/Endings was my introduction to Bannon’s music and I loved it. It paid homage and channelled the sound of pioneering drum n bass artists I’m old enough to remember emerging. It also was innovative enough to never sound like some re-hashed tribute. So when Ninja Tune announced Pattern of Excel I was immediately interested. As I’d already bypassed any sceptical notions, when I learned of its more ambient leanings, I was extremely intrigued. I knew that this could be something a bit different to anything else currently labelled ambient. What Pattern of Excel is however is frankly remarkable. I listen to a lot of ambient/electronic music and am continually taken aback by how people can push the boundaries and Bannon pushes hard on this collection.

The press release came through with limited info, no descriptive spiel about what influenced it or what process was used in its recording. That in itself was refreshing and helps the music form the mood and feel without any preconceptions. The album bypasses easy categorisation and straddles various styles and genres .At times when listening I’m hearing glimpses or influences of Angelo Badalamenti’s Twin Peaks score, Eraserhead/Midnight Cowboy Soundtracks and Autechre. That gives a microscopic indication of the variation and ingenuity at work on this album.

The tracks are at times short, brief clips of sound mutation blending into the next. This lends to the album working best as a whole, despite the wide range of sound this is very much a cohesive work. There are highlights and some tracks could work on their own better than other of course. “Inflatable” immediately jumps out with it’s machine-gun beats for example. Also “Disneu Girls” is irresistible with pedal steel and slide guitar. “Memory 6” is another, it feels like it belongs on an early Warp Atificial Intelligence compilation.

There are some highlights throughout Pattern of Excel clearly but the real enjoyment is immersing yourself in all its strange and beguiling greatness. Don’t be a sceptic, there’s plenty to enjoy here for existing fans and newcomers.