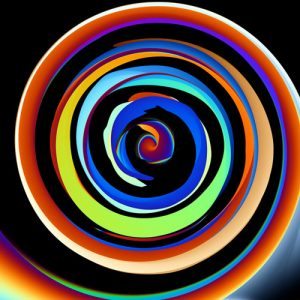 Any EP that concentrates on a single track and myriad remixes tends to focus the listener on production techniques and less so on the music itself. This isn’t necessarily a bad thing – remixing is as much of an art form as recording. So let’s get the easy part out the way: Machines in Heaven have continued their impressive collection of electro-whizz-bang-sequenced-shoegaze here. Over the piece ‘Displacement’ stands out for its killer bassline and the Glasweigan accented vocals, which give the track its own personality. The vocal at times is wrought with emotion, “sing to me your beauty…” again and again, one way, then another. Sequencers and guitars add layer upon layer, giving the listener something to really explore.

The bass and familiar vocal are two calling cards of the band, but with this new release – which includes three remixes as well as a second track, a Garage Edit of ‘Feel Slow’ from the ‘Hindu Milk EP‘ – Machines in Heaven have shown how much they’ve grown since Bordersbreakdown was released in March 2014. They’ve matured much in way as the likes of Errors have, by taking dance music as nothing more than a base, and building from it. The remixes, particularly from Drg Cvltve show however that this is potent electro that can be a lively sort, full of slow-burning energy and perfect for a big sweaty dancefloor.

At the other side, Graeme Clark’s The Revenge Guitar Dub Remix is a different affair entirely, synths dominating a drum machine backdrop. At around eight minutes, it’s more of an exploration, picking apart the root of the track and sending it shooting off elsewhere.

You get the feeling though that ‘Displacer’ marks the end of Phase I for the band – the question now is where Machines in Heaven go next. A second album, presumably – one that feeds itself from the growing influence and reach of the band. It’ll be one to look out for, but in the meantime, this EP is a fine example of where Machines in Heaven have grown to.