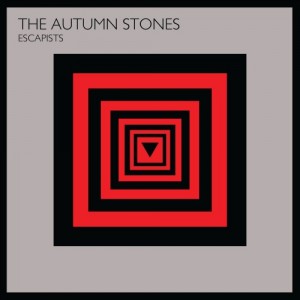 With the choppy guitar intro and the funky saxophone, ‘Time is a River’ – the opening track on Escapists, shouts for attention. It kicks off the second album from Canadian quarter The Autumn Stones in perfect style.
It’s music that hasn’t so much been influenced by the 80’s as immersed in it completely. What we’ve got here is old-fashioned indie  from back before it became a *thing*, back when The Smiths were the most amazing thing on the planet. The guitar isn’t as impressive as Marr’s, but vocally Ciaran Megahey bears a shining – at times eerie –  resemblance to Morrissey. On the afore-mentioned opener however,  he’s more Elvis Costello – another artist who seems to have made an impression on the band.
Lyrically, it’s philosophical – war, religion and the links between the two dominate areas of the album. Musically, as well as that 80’s indie rock watermark, there’s hints of new wave, of shoegaze. It’s sharp, and sincere in its ambition. Equally so in its execution. ‘Endless War is a big dirty guitar wall, again backed by brass. “Gotta win this war, gotta win this war” sings Megahey, the melody infectious.

Escapists by The Autumn Stones

Three singles included here preceded the launch of the album, including ‘End of Faith’, which with heavy delay on the intro brings shades of ‘How Soon is Now’ to the fore, the vocals low and dark, that distinct edge of Morrissey becoming apparent for the first time – the ringing guitars joining Gary Butler’s hugely influential saxophone, which adds a unique dimension to the band – it’s a stand out track.
Pushing on, there are elements of Madness in ‘In With the In Crowd’ (another single), while a softer sound on ’Sweet Libertine’ emerges, though the lyrics are as a sharp as ever “She’s too high to lie / I’m lying about her lying,”. The track breaks at around 3.30, changing pace, delivering the title in a sweet refrain, before segueing into the sharper, military drums of ‘Spirit Shadows’, another album highlight, which features a sweeping guest appearance by Rumour Cubes’ Hannah Morgan on violin, who appears on a number of tracks here via the miracles of modern technology.
Recorded in the band’s home town of Toronto, the co-production of the band and Dean Marino is rich and dynamic; they could have easily focussed on the strength of Megahey’s vocals, but instead his voice is another part of the mix. The Autumn Stones describe themselves as dreampop but that’s a bit misleading – there’s too much tempo here to be considered dreampop – too much energy. The power of that emerging 80s indie scene is what fuels the album, and it’s sure got a lot of energy.