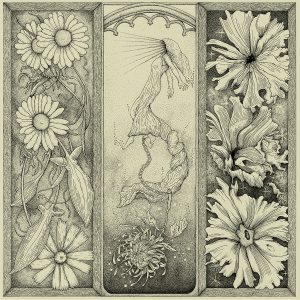 Consider this my introduction to Cloud Rat. My finger has been off the pulse for the last few years after the genre (in the broad spectrum of what I like) became saturated by the rise of “Entombed-core”. It became tiring VERY fast. Periodically though, something great comes along and blows my mind. I’m glad that this found its way to me.

I had no idea what to expect from this band or this release to be honest. From whispers through the grapevine I was expecting a grindcore release, but I was very surprised to put it on and be greeted with a band that were so massively influenced by 90’s crust and hardcore. At points, this sounds a lot like Left For Dead, and I love it.

Qliphoth is the third album from Detroit, Michigan’s Cloud Rat, and with the addition of a new member adding electronics, their sound has moved on from the impressively fast pace of the last two albums. This is immediately noticeable from the get go. Guitars drone, electronics swirl like crackles of electricity and the vocals create an ascending, air like torrent that quickly collapses into feral chaos where anything goes.

‘The Upper World’ is a brilliant reminder of what hardcore can and should always be. Long forgotten to me since Cursed threw in the towel a few years back. Not only do the lyrics have a place and a meaning, the pace, the riffs and the delivery of the music should also. Ferocity and purpose are key, without those hardcore is pointless, and both are captured amazingly well here. The same can be said for ‘Bloated Goat’ in all of its glory. All I want to do is bang my head, pump my fist and scream at the top of my lungs like a mad man.

Like a lot of bands who play this and similar styles managed to champion 15+ years ago, the lyrics on Qliphoth can stand on their own two feet, with or without the music. They invoke relatable meanings which are shiftable from person to person. This is the mark of not only and excellent lyricist, but also a fantastic writer, and Madison is both.

“Sometimes I think of how hardly alive you are at all.
Dodging bullets. Dodging raindrops.
December’s here, and this rattling can,
Of a group “home” (we call a home) can’t stay warm.
There are no colors. The world feels dusty.
The thoughts that swim in & out make a traitor out of me.
Suspend myself from the ceiling and watch us all live.
I break and slip porcelain plates.
Abandoned. Restrained. Clinking chain.
Move to the same motions. I stare back at the clock.
How do I convince you I’m living?
Creeping smile, dry lips close.
I entertain thoughts that lull my mind.
Just sitting here in my head (free reign for my brain).
This place is the fly that won’t stop following me.”

Powerfully brilliant, and even more so with the band behind her.

If I could say one thing which I think this release does lack, it would be a bass player. A lot of bands who play this music go for the trio of drums, vocals and guitar. The bass player is always missing, and it’s a real shame. I remember the first release that Agoraphobic Nosebleed brought out when they brought in bass. It altered everything and gave the band a power they had never had before. It was exciting. Although Cloud Rat do an amazing job without it, I can’t help but feel that having a punishing, grinding bass tone behind this would do them wonders.

With Qliphoth, Cloud Rat manage to bring a downright impressive and enviable amount of collective influences to the table. Grind, crust, d-beat, death metal, doom, black metal, sludge, ambient passages, everything rolled in together, and a lot of the time across the same song and it never once sounds disjointed. It is remarkable. With the 17 songs on offer, there really is something for all fans of heavy music to grab here, and you definitely should.

This is Cloud Rat’s Prowler In The Yard, II, Helvete, Exit and Jane Doe. This is the sound and blueprint of a band who are becoming champions of the genre.