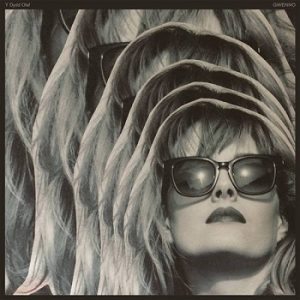 Released on July 25, 2015 via Heavenly Recordings

Former Pippetes singer Gwenno‘s new album, Y Dydd Olaf is, by all accounts, a political concept album inspired by a 1970’s Welsh sci-fi novel of the same name. Blending themes such as partiarchialism, cultural control and government controlled media it almost feels apt for the modern age. It also feels slightly dense and possibly pretentious too so it is with some relief that her Bandcamp page also states she likes to make pop music. It is pop music we get too, of a slightly glacial style and one more akin to the synth pioneers such as Human League than any modern day dross.

Indeed, it’s maybe Human League we can gain some sense of relevance here as they too dealt with dystopian futures (pre Dare) and there is some of that sense of exploration here as Gwenno creates a cold sound which pervades the rather warm vocals. It’s almost too clinical though and with modern day production values a lot of that sense of dread that those earlier pioneers of synth pop found has been subsumed into a big sound covered in gloss and glamour. More Goldfraap than HL, there is at least a knowing feeling which adds more than a little charm.

Hailing from Cardiff, it’s intriguing that the music from that city tends to have a slightly knowing sound and unlike bands from further up Wales, sticks to a more cosmopolitan feel. For all it’s deep resonance on a political scale, and to get to full impact you would have to understand the Welsh language, there is a sense of detachment which invades the music and makes it difficult to love fully.

There’s no need to despair though as Y Dydd Olaf is actually a very good album for all it’s cold detachment. Gwenno’s voice positively shines throughout and on tracks such as ‘Chwyldro’ and ‘Sisial Y Mor’, threaten to heat up the rather cold feel. The music is actually rather good too and whilst it’s got nothing that hasn’t been heard before, it provides a glistening backdrop to the no doubt interesting story.

It’s difficult to see where Gwenno will head next after this album although you get the feeling she won’t stand still for a second. For all it’s faults, Y Dydd Olaf does have an interesting premise and it’s mostly a very good album. It’s maybe not one you will return to often though and there lies the problem. It will no doubt carve out it’s own little niche audience but for how long will they stay enraptured? Only time will tell.