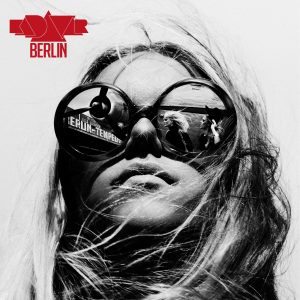 Berlin is Kadavar’s long awaited US release and third full length album. Moving to Berlin almost 10 years ago, this album was perfectly named and themed. Kadavar moved away from home, and used the world renowned city’s energy to write the album; it could even be taken as a type of homage. Using the 70’s rock n roll inspiration to go off of, and the sound of the classics we know and love (such as Black Sabbath, Pentagram, and the like), Kadavar continues their quest for bringing the much acclaimed psych rock-n-roll to a whole new level. Very much like how Led Zepplin did with US based blues.

I feel like Kadavar is one of the newer bands responsible for bringing back the coolness of psychedelic rock n roll. I saw them live at the 2013 Austin Psych Fest and was very impressed. Good presence, great rhythm, and just all around great at bringing that psych rock feeling into the 2000’s, despite what the “people who were there, man” say about the 70’s.

Berlin to me is more ‘poppy’ than their previous albums, especially their self-titled, first major release. But there is still an appreciation for the true musicianship of their [obvious] favorite rock era. I have to agree with a lot of reviewers out there, that this isn’t their best release, but certainly not the very least. My favorite qualities of Kadavar in general are the vocals, the killer guitar licks, and the heavy, on-going bass. It chugs away and gets you going into the rhythm. And while the guitar and vocals can’t be beat, I am hearing less bass on this album altogether.

The 5th song on Berlin is ‘Pale Blue Eyes’. It has some really great guitar sounds right up front. The vocals go along with them throughout, creating a very well put together, jamming song. It’s amazing this album was recorded in only 4 short months, from start to finish. They have methodically thought through their unique guitar sounds for each song.

My only complaint besides the less bass driven sound, would be that there feels like there are a few “filler” songs. ‘The Old Man’ and ‘Spanish Wild Rose’ feels like they are trying to change the tempo a bit, bring it down, and extend the album, which is necessarily necessary. I could of probably lived without those two songs.

The album picks back up at the 8th song, ‘Circles In My Mind’. Back to the Black Sabbath/jammy sounding rock. The album ends with a talented song ‘Into The Night’. This was probably my favorite song off the album. Very rockin’, and a little darker than the poppy sound this album started out with. And there is that walking bass line! To end the CD and its theme (I will leave it a surprise for you to find out), there is a bonus track. It’s very ethereal and dreamy. A very cool way to end the album. It makes up for more than enough psychedelics the other songs might have been lacking.

If you are into psych rock, especially Graveyard, Uncle Acid, etc…check this album out. You may have to skip around, but you’ll be jammin’ by the end.