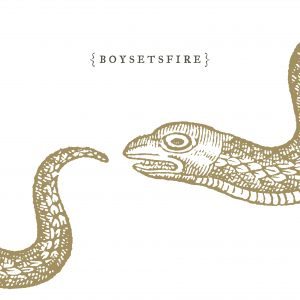 A band that should need no introductions, Delaware Post Hardcore heroes Boysetsfire return with their sixth album in total and second of their reunion period. The album is self-titled and quite aptly too, as Boysetfire does what Boysetsfire do best, delivering anthemic and riotous rabble rousing post hardcore, although this time with a more positive outlook on life.

The lead promotional single ‘Cutting Room Floor’ is a monstrous anthem that will certainly re-connect band and fans with its melodic emotional charged post hardcore in the ‘commercial’ style BSF do so well; swirling melodic leads combine with subtle riffage in the verse meeting up with the bridge that builds up the EPIC CHORUS with lyrics that are ambiguous enough to be either political or personal (a theme maintained throughout). The dramatic breakdown and build up in the second half with emphasis on the rumbling drums somehow make the chorus sound even bigger – it might be a tad repetitive but by jove it works.

‘Bled Dry’ kicks of proceedings in more aggressive style: hardcore riffs and aggressive shouted hardcore vocals, it has a metallic undercurrent but will certainly encourage much two stepping pit action, short and to the point leading into ‘Breathe in, Breathe Out’ which straddles the two worlds BSF inhabit of overtly aggressive verse and big melodic chorus. It contains some nice lyrical imagery and while vocals in the chorus verge on the side of saccharine the music provides a thump.

Before and after the aforementioned ‘Cutting Room Floor’ we have the really good chest beating metallic hardcore of ‘Coward’ that’s very “old school” in approach, the thrashier and bouncier ‘Dig Your Grave’ and a face stripping call to arms ‘Don’t Panic’. All three tracks dispensing of any sense of melody and aim directly for the throat!

Interestingly as a counteraction to all this testosterone ‘Fall From Grace’ arrives and is a full on power ballad, it’s a nice song but does stick out like a majorly sore thumb especially when followed up the riotous punk rock of ‘The Filth Is Rising’.

Thankfully it’s not a ‘front loaded’ album as a few equally hook-laden tunes manifest themselves in the latter half, especially the second highlight of the album ‘Heaven Knows’ – although starting out as overtly pop-punk it suddenly erupts into a superb post hardcore crescendo, neatly followed up by ‘One Match’ that is pure sing along fun (with some interesting lyrics to boot).