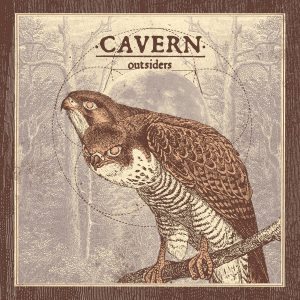 Released on August 25, 2015 via Grimoire Records

The age old question “When does imitation stop becoming flattering?” The boys in Cavern name Russian Circles as one of their influences for their latest album Outsiders and it becomes clear very soon after pressing play. Right away you hear riffs, head-bangingly-heavy guitars, and only the loudest of drumming. Hell, it’s even a trio, just like Russian Circles.

Cavern may be uninspired, but that doesn’t mean they are without talent. The album as a whole is very well put together, each song is structured with care. The production is definitely there, even if the dynamics are a bit lacking. I want the quiet parts to actually be quiet; It makes the heavy parts more dramatic.

Speaking of the quiet parts, it seems like the drummer can’t shut up to save his life. During the calmer passages, you will always hear the drummer doing something. Either he would go off-beat, or he’s only doing this to keep the guitarist and bassist on-beat. No matter why he does it, it’s annoying, and it’s another strike against the whole dynamics issue I mentioned earlier.

Track after track, it becomes increasingly as to just how uninspired they are. Every breakdown, solo, riff, and drumbeat sounds like Russian Circles, except with a nearly nonexistent bassist, instead. If this is the best Oakland has to offer, perhaps Grimoire Records should abandon their exclusivity.