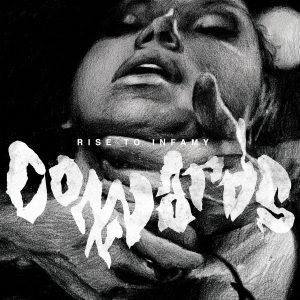 Sludge is the kind of genre that most people associate with doomy slowness. Something that’s going to punch and push along, thick with layers of hatred and/or frustration. And though the genre is never known for its speed, it still can have an incredible degree of intensity. However, bands like Cowards take it one step further. Pushing and punching harder than most in the crowd. And with their latest release, Rise to Infamy, it’s clear that they’re leaders, but are also in a genre of their own.

Cowards continue their legacy of filthy, crunchy riffs and pure vitriolic backhands on Rise to Infamy. If you’ve missed out on the band’s sound, the ultra distorted, flesh charring assault that the band has brought to the table with previous releases has continued to solidify as their legacy trudges forth. Perhaps you’d heard their previous efforts like their debut LP Shooting Blanks and Pills or their 2013 EP Hoarder. If you haven’t, now is the time to get on this.

Imagine the marriage of highly distorted black metal ala Thantifaxath and the sharply distorted doom of Primitive Man sprinkled with bits of Calvaiire. Somewhere in the middle of those bands you’d find Cowards laying out oozing sludge. The band’s highly distorted and feedback purveyance has become the their strongest staple. What makes them stand out so much from a lot of modern bands is the injection of sheer intensity, even when going slow. A lot of the focus bands put on their sound nowadays is sheer heaviness. Cowards don’t need to worry about being heavy. They simply pull it off and still manage to keep strong tempos that don’t rely on riffs that move at the flying speed of a glacier. Don’t believe me? Tune in for the opening track ‘Shame Along Shame’.

However, heavy Cowards may be, they’re also far from lacking in the speed department. The blazing back drop of black metal helps Cowards throughout. When reaching tracks like ‘Low Esteem’ there is a constant push of faster guitars and faster drums for almost the entire track. Other pieces like ‘Anything But the High Road’ also push this sound, picking the album up and blazing it forward with a bulldozer-like feeling.

Cowards can feel atonal at times. Rise to Infamy, I can tell you already, is their strongest release, however that doesn’t stop the band from coming off as feeling samey at times. Songs are almost always switching between a black metal and sludge vibe, which can make piece feel like the bleed into one another. The album isn’t any less intense for it however. The stellar recording/mastering quality is of the album gives it a live vibe. Like the band is strangling you in person, as opposed to just performing in a studio.

Rise to Infamy is Cowards at their most vicious. Previous releases have shown plenty of promise for the band and they’ve only gotten better since their last two releases. Despite its atonal nature, there’s still plenty to love and an energy level that most bands don’t even come close to matching. And while mostly dabbling in the sludge genre, as mentioned before, Rise to Infamy channels plenty of black metal. Metallic, thick and loathsome, Rise to Infamy is a scathing album that peels back the skin and salts the wound while laughing at its victim.