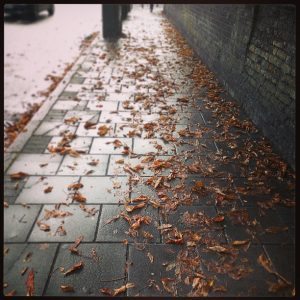 “Well we’ve been a good few hours drinking,
So I’m going to say what everyone’s thinking,
If we’re stuck on this ship and it’s sinking,
Then we might as well have a parade.”

As the nights begin to draw in, as tents are put away for the winter, and jumpers are fished out from the backs of closets, my taste in music inextricably, inevitably, shifts. The music I gravitate towards at this time of year is fundamentally different to the music I seek out during the Summer. As my mind curls inwards, and battens down the hatches against the coming months, my brain turns, year-in, year-out, to the same albums. Frank Turner. Get Cape Wear Cape Fly. The Decemberists. In years past, Laura Marling and Emmy the Great and Sia and Zero 7. More recently, Grace Petrie, Low, James Yorkstone.

“Got possessed last night by a demon made of drink,
Used my mouth to say things I don’t even think.”

These are albums I know better than I know my own name. I know every note, every word, every harmony and every chord change. The length of the gap between every song. Every final chord. These are albums I sing along to without even realising that I’m singing. Albums which are so imprinted on my brain that I know with absolute certainty they won’t surprise me or challenge me in any way. To many of you who make it your life’s mission to seek out music which explicitly challenges and surprises you, these words will be anathema. But you cannot underestimate the comfort an old friend can bring in dark times and, make no mistake about it, these are albums which have got me through dark times. These are albums I have listened to in tears and in despair, but these are also albums I have listened to with hope and the gradual understanding that I am not alone in feeling the way I feel.

“And on the worst days,
When it feels like life weighs
Ten thousand tons;
I sleep with my passport,
One eye on the back door,
So I can always run.
I can get up, shower, and in half an hour I’ll be gone.”

None of these albums are instrumental. These are albums I have sung my heart out to, bellowing out lyrics in fields and in pubs, with my closest friends, with total strangers who became friends, and those with whom I just shared that single, exhilarating moment in time. These are albums whose lyrics I have pored over in my room, late at night, marvelling at the parities with my own life and glossing over the differences, as teenagers have done since popular music was invented. These are albums which played a fundamental part in the development of my sense of self. Albums without which I honestly could not say I would be the person I am today.

“You made us feel at home,
Broken backs on floors of stone,
But I’d rather wake there any day
Than wake up here alone.”

Knowing these albums so well allows my mind to wander while listening, but simultaneously forces my mind to wander to happier times. I cannot listen to Love, Ire & Song without feeling not only a burning wish to get out there and do something, but also a strong sense that whatever I do might, could, maybe just actually work. Chronicles of a Bohemian Teenager Part One instantly brings to mind Victoria Park in the rain, and trips up to London when I was, literally, sleeping on the stone floors of friends. The Crane Wife 3 conjours up a kitchen in a hostel in Plymouth and times that, although sadly now behind me, I would not have changed for the world.

These are not albums I tend to listen to in the Summer, when my spirits soar with the temperature, when my mind expands to the horizon, when I stride forth into a field, cider in hand, to seek out music which surprises and challenges me. But every Autumn, I turn to these albums without fail; old friends to see me through until the days start to lengthen and I can uncurl towards the sun once more.

“You and I, we’re not designed to be evergreens.
I guess that it’s time to long for April to come.”