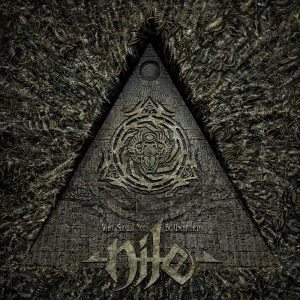 Nile‘s seventh album At the Gates of Sethu released in 2012 seemed to split opinion among their fan-base like they never really had before. Sure, immediate predecessors Ithyphallic and Those Whom the Gods Detest might have been a little polished and clean for a band so steeped in the decrepit tombs and murky annals of ancient Egyptian history, but they were still hard-hitting death metal records crammed with the kind of tunes Nile had made their name unleashing. For some though, At the Gate of Sethu pushed too hard, arguably compromising their dense trauma by taking the band’s famed technicality to the utmost degree with a thin production job bordering on a laptop speaker.

With something to prove for the first time since bursting onto the scene in the late 90s, Karl Sanders and co have made a conscious effort to address these issues and demonstrate why they’re one of the revered forces in death metal today with follow-up What Should Not Be Unearthed, and it shows. ‘Call to Destruction’ is a rampant opener in the tradition of Nile classics ‘Kafir!’ and ‘Black Seeds of Vengeance’, very much the call to arms the title suggests as Nile seize the opportunity to bash the door down right out of the gate.

For a band as technical as they are Nile never fall into the trap of feeling clinical and built for musicians rather than fans, and this not only stems from their songwriting chops, but their unique vibe and authentic Egyptian atmosphere, shining through both in the chaotic bruising of their extremity and in the occasional flourishes of extra instrumentation found in the intro of album highlight ‘In the Name of Amun’, interlude ‘Ushabti Reanimator’, or the extended closing section of the title track, reminding you exactly what band you’re listening to if the other signifying features had not already done so. While the opener and ‘Liber Stellae Rubeae’ demonstrate the exceptional speed they’re so good at, other tracks such as closer ‘To Walk Forth From Flames Unscathed’ excel in lurching necromantical sludge providing welcome respite. The real high point of this album though arrives around halfway through with ‘Evil to Cast Out Evil’, descending like a plague over the band’s titular river with effortlessly memorable guitar lines, a chanting chorus which reeks of Cannibal Corpse’s debaucherous ‘A Skull Full of Maggots’ as much as it does their tech death peers destined to make it a live favourite, and a solo which comes as close to genuinely soulful as Nile get.

While the criticism of At the Gate of Sethu‘s over-technicality is potentially somewhat exaggerated (‘The Fiends That Come to Steal the Magick of the Deceased’, ‘Enduring the Eternal Molestation of Flame’, and near title track ‘The Gods Who Light Up the Sky At the Gate of Sethu’ are as powerful and memorable as anything in their back catalogue), the real flaw of that album that is made up for here tenfold is the production. Gone is the thin, almost painful metallic compression, and back is the dank bowel-loosening rumble of career highlights Black Seeds of Vengeance and Annihilation of the Wicked, allowing Nile to let the full brunt of their attack be felt and falling right in line with the record’s subterranean title. As proven with studio appearances for Týr and on a recent solo album drummer George Kollias is an absolute master, not faltering with his unreal precision and skin-flaying fills for a moment. Nile’s vocal presence meanwhile might not be as renowned as their technicality, but is just as distinctive, suffocating lows coupled with deranged and highly audible mid-ranged barks stemming from a dual vocalist approach almost unmatched in death metal.

It’s not perfect – a couple of tracks while strong don’t quite maintain the momentum set by the highest peaks, and there’s potential for some of the longer tracks to lose a minute or two without losing any of their impact – but What Should Not Be Unearthed is another show of deity-like strength from a band who after reinvigorating the death metal scene nearly twenty years ago seem set to annihilate any cynicism based upon their previous effort, remaining as powerful as they’ve ever been.