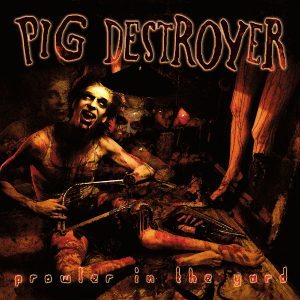 Released on September 4, 2015 via Relapse Records

Reissues and re-releases always offer an easy excuse to dive back into records with importance and standing long established within the musical landscape, and few albums are more deserving of this time than Pig Destroyer‘s Prowler in the Yard. Released at the dawn of the 2000s during a period of real creative upsurge for grindcore and extreme metal as a whole after the comparative doldrums of the late 90s and coming from a band relatively low-key within the scene, alongside works by Nasum among others Prowler in the Yard really proved that far from being a one-dimensional exercise in noisy savagery, grindcore could be as ferociously imaginative and boundary-pushing as any other style.

It certainly begins in unconventional style with the text-to-speech voice reading of vocalist/lyricist J.R. Hayes’ short story focused on the recurring character of Jennifer and the torturous hypersexual “performance” she indulges in with an unfortunate, but seemingly complying victim, the disparity between the neutral computerised voice and the disgusting scene it paints certainly setting the mood for a disconcerting experience, amplified as a wave of mechanised noise begins to creep behind the voice and cause eyes to widen in anticipation of what’s to come.

Once the ravenous ‘Cheerleader Corpses’ explodes into life, this is delivered tenfold. As usual within grind songs are dessicated and disposed of in wicked time, but the tracks here display a remarkable sense of identity, managing to form an enormously cohesive half an hour of skull-splitting barbarity without the songs blurring into each other into harsh mush. A large part of this is due to Scott Hull, who decisively proves the power of the riff even in music this hyperactive and unwilling to stay in one place for long. There’s so much more playing with dynamics than on the average grindcore record, songs ranging from twenty second bursts of speed like ‘Ghost of a Bullet’ and ‘Murder Blossom’ to the five minute dread-soaked doom of ‘Starbelly’. There’s the staccato stops and starts of ‘Tickets to the Car Crash’ and the tight quadruplets of ‘Junkyard God’ following the looseness of the drum intro on the total other end of the scale (Brian Harvey abuses his kit across the board giving an incredible performance), ‘Trojan Whore’ and ‘Naked Trees’ display a more thrash-informed brand of adrenaline, while ‘Sheet Metal Girl’ and the stunning snaking groove of ‘Strangled With a Halo’ reek of not just pure violence but a genuine stomach-churning sickness. The best is saved for last with ‘Piss Angel’, the juggernaut ultra riff destined to lay waste to every audience hearing it, the lurching coda maintained and allowed to just decimate and bruise.

It’s a record overflowing with ideas and each one is nailed, not just within the performances but in Hull’s mastery of the studio. ‘Ghost of a Bullet’ might last just twenty seconds, but the distorted mechanised screams which loop in its final quarter make it one of the most unnerving points of the record, built upon in ‘Body Scout’ as cavernous disembodied howls terrifyingly burst forth at uneven intervals out of the silence long after the song has actually ground to a halt. The coiled menace of ‘Hyperviolet’ gives way to an extended ending in which all instruments drop out other than the ceaseless advance of the drums beneath blaring industrial sirens, building and intensifying for a duration far longer than what is comfortable, stripping away barriers of protection one by one till the listener is queasy and thoroughly suffocated, which the ensuing ‘Starbelly’ immediately capitalises on with one of the most teeth-cracking low end riffs of the record. Then there’s the conclusion of the Jennifer story that follows in the wake of ‘Piss Angel’, the perversion of the details succeeded by a soundscape of distorted childlike voices and eerily shimmering atmosphere ending the record on the correct creepy note.

The cherry on this nauseating cake is J.R. Hayes, not only putting in a twisted and animalistic vocal performance, but supplying lyrics and themes that elevate Prowler far above its more typically brutal contemporaries. It’s a record of self-hatred projected onto the world around its protagonist obsessed with the beauty of the morbid and the sick. ‘Starbelly’ reads like a suicide note as it details masturbating to the pictures of a lost lover at her birthday party as they are the only ones the writer has left. ‘Junkyard God’ describes her adoration of his skin left ripped apart by her touch, and ‘Tickets to the Car Crash’ bluntly proclaims “Trauma is sexy”. It’s a record dispensing of all distinguished moral lines and simply indulging in depravity as though it were the norm, right down to the perfect cover art which depicts a figure not only slicing himself apart and dismantling his own body, but with a look of euphoria that suggests that this is what he had been longing for and was meant to do all along.

This 2015 release though is a remaster by Hull, and touching and tampering with a release so beloved and impactful is always a questionable move, something Relapse are guilty of more than many other labels. Unfortunately this seems to be the case here. The remaster is undoubtedly of a better sound quality with the power of 2015’s technology and Hull’s expanded experience as a producer on its side, and the lower end (Pig Destroyer at the time famously lacking a bassist) especially is significantly bulked up. By doing this though the ear-piercing intensity is somewhat toned back, a gutsier record, but a little too controlled and safe sacrificing the sense that the music’s barely reined in and could fly off the rails at any second and massacre your pets. Ironically the CD booklet contains Decibel’s Hall of Fame article for the album in which Hull claims that he has no wish to touch the sound. Further differences include the separation of ‘Piss Angel’ and the conclusion of the Jennifer story into two tracks, the addition of an unreleased bonus track and the removal of ‘Evacuating Heaven’ due to the original vocal tracks being missing. Happily though this issue contains the original version of this classic album as a second CD, granting the listener the choice of whichever mix they may prefer and salvaging it.

Prowler in the Yard is pretty much as perfect as an album of this style can get, a fucked up work of genius wholly submerged in warped perversion doubling up as a nigh unmatchable gut punch and adrenaline rush. It catapulted Pig Destroyer into a position as one of the most respected bands in extreme music and remains as potent fifteen years on. Ultimately though Prowler in the Yard summed itself up back in 2001 before any critics had a chance to touch it. As Jennifer and her subordinate begin to convulse in their sick show, one of the witnesses states: “This is disgusting. This is pornography”. Another, far more in tune with what it represents, responds: “No, no, no. This is beautiful. This is art.”