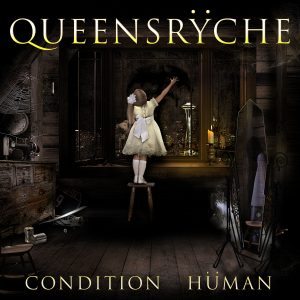 With the Queensrÿche name finally secured and in the hands of the people where it should be it’s finally time to talk about music again. Although newcomer Todd La Torre did a phenomenal job in the vocal department on the first post Geoff Tate album, the songs didn’t turned out to be so memorable in the long run. Let’s see of La Torre and co managed to deliver on the sophomore record, entitled Condition Hüman.

The album starts rather energetically with ‘Arrow Of Time’, a song which immediately invokes the spirit of the band’s pre Empire days. This mainly because of the dual guitar work and La Torre’s 80’s metal style of singing. Something the band repeats rather splendidly on ‘All There Was’ and ‘Guardian’. All the aforementioned tracks are vintage Queensrÿche in terms of memorable hooks, catchy vocal melodies and tasteful leads and solos. Other stand out tracks are ‘Hellfire’ and ‘Toxic Remedy’, which easily rivals seminal classics like ‘I Don’t Believe In Love’, ‘Speak’ or ‘Jet City Woman’.

What’s a Queensrÿche album without at least one sappy ballad? ‘Just Us’ is arguably a bit on the sentimental side, but it allows Todd La Torre to showcase a softer side as well. Condition Hüman‘s grand finale comes in the form of its title track and it’s very reminiscent of the eerie feel of Promised Land, although it lacks the musical and emotional depth of the latter one.

Condition Hüman is a deliberate throwback to Queensrÿche’s first five albums without sounding contrived or dated. A lot has to do with the modern production, courtesy of Chris Harris, but most of all this album is clear proof that Queensrÿche is still a musical relevant force in today’s metal landscape. Welcome back, gentlemen!