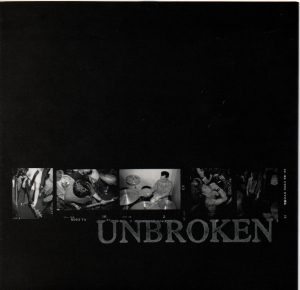 Released on September 11, 2015 via Three One G Records

It’s impossible to overstate the importance of a band like Unbroken. They were one of the torch runners in the early metallic hardcore scene, successfully merging a hardcore sound that still carried meaning to a lot of people with a powerful metallic backbone that made their sound all the more refreshing in a scene that was stagnating quickly. When you listen to a band like Unbroken, you can hear where Converge got the influence in their early days, you can hear why Planes Mistaken For Stars and Shikari existed, you can understand why the words “life.love.regret.” became the three words that meant so much to so many.

This band meant something.

Back in the mid 90s, a young San Diego kid named Justin Pearson loved this band so much that he formed a small DIY label to put out their first record. That label was Three One G. The label went on to put out some records by a massively varied roster including Cattle Decapitation, The Blood Brothers, Head Wound City, Chinese Stars amongst many others. Justin Pearson himself went on to play in almost every band ever, including Swing Kids, Some Girls (both bands featured members of Unbroken), The Locust, The Crimson Curse, Retox…the list is huge and seemingly endless.

Originally released in 1994, you get a real sense that And/Fall on Proverb was and still is astoundingly important when you listen to it. This release inspired a generation of kids to breathe new life into a sound that had become tired and formulaic. Unbroken challenged that formula. They were a straight edge band, but instead of outright preaching to their audiences about what was right and what was wrong, they dealt with much darker and deeper issues that helped them pave the foundation for what would become an integral part of the emotional hardcore/screamo sound in the years that would follow. They packed it in long before their time should have come, only really being active between the years of 1991 and 1995, and reforming periodically to play festivals and to raise money for guitarist Eric Allen’s family after he committed suicide a few years after the band’s original demise. They released two albums and a decent run of 7 inch records in that time, all of which are available on a single CD package named It’s Getting Tougher To Say The Right Things (Released on Indecision Records). Both albums were put out some time ago on a single disc release called The Death of True Spirit (Indecision Records) and if you can get your hands on it, I would strongly recommend that you do. Members went on to play in bands like Swing Kids, Some Girls, Narrows and Stabbed by Words among others.

With the re-release on the And/Fall on Proverb 7 inch, Three One G Records have released old words for a new generation to call their own, and in a scene that is now stagnating and over saturated with copy cats, Unbroken are still the real deal.