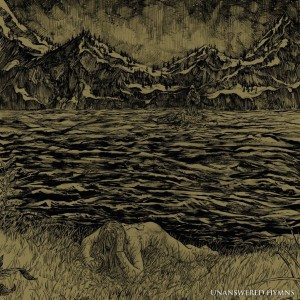 Released on September 18, 2015 via Battleground Records

Sacramento, California isn’t really known for bands like CHRCH. Our whole lives we have been treated to bands like Far, Will Haven and the mighty Deftones. But it would seem that Sacramento is also a breeding ground for one of the most immediate and imaginative doom bands in recent memory.

Unanswered Hymns is the new album by CHRCH (forced to change their name from Church due to a lawsuit launched by Australian band The Church) released via Battleground Records, and I’ll chalk it up as a runner for doom album of the year. Merging heavily down-tuned, fuzzed out brutality with some of the most open, mellow and psychedelic trips is no easy feat, but it’s done to such a great degree that some of the bigger hitters in the scene should wake up and take note.

CHRCH manage to strip back the aesthetics of doom, post-rock (in places), sludge and shoegaze and build them from the ground up. All at once, it is dark, dense, ultra heavy, melodic, spacey, beautiful and awesome. The vocal deliveries add a great deal to this as well, treading a line between the atmospheric stylings of the early 90s shoegaze movement, and the second wave of Norwegian black metal. When vocalist Eva Rose sings, periodically she reminds me of Rachel Goswell of Slowdive and Ozzy when he sang ‘Planet Caravan’. When she screams she treads a line between Stevie Floyd and Nocturno Culto. She is backed up by guitarist Chris Lemos who delivers the duties with the low growls, providing an impressive backdrop for Eva’s vocals to ricochet against. The pairing works remarkably well, and adds to the sheer brutality in places.

The whole album clocks in at the 45 minute mark over three songs. I’m not going to tell you about any of the standout songs, because they are all fantastic. Opener ‘Dawning’ pretty much sums up what this band are all about though, so if you want to check out a track, that’s the one.

Contender for doom album of the year, and highly recommended if you like it low, fuzzy, heavy, melodic and soaked in blackened brine.