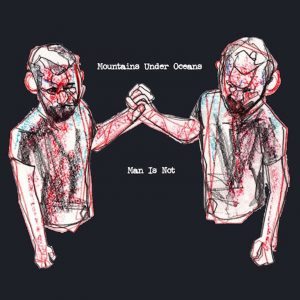 Mountains Under Oceans, who just recently finished their tour with VASA, kicked off said tour with the release of their EP Man is Not. [punctuation band’s own] This EP, combined with VASA’s brilliant debut LP, must have made for a excellent show, I wish I was around for one of their tour dates.

I have to admit I giggled a little bit when I read the promo spiel, saying the album was about “The Duality of Man” and instantly thought of Kubrick’s ‘Full Metal Jacket’. That phrase has been used sarcastically about something tries to be deep, and I also admit that such a cliché phrase biased me in a rather negative way. But truth be told, I think they pulled it off right. This little conceptual EP about the duality of man is in no way pretentiously deep or cheesy.

I was seriously impressed by the talent apparent in their previous album, but didn’t care at all for the vocals. They felt forced, like they couldn’t be heavy without metallic growlings, putting the whole album askew. I was extremely pleased when I had finished the EP without hearing vocals at all. I firmly believe their talent shines through clearer when they don’t muss or fuss with any singing of any kind.

After abandoning the underwhelming vocals, what’s left is amazing. I highly recommend downloading this EP in some sort of Hi-fi format; the production value is the same as before, if not better, and the artwork for the individual tracks adds a layer of depth for further enjoyment. The first half of the EP is bone-crushingly heavy Post-Metal that is as awesome as it is brutal. The guitars are outright scathing, and the bass picks up the low end expertly, I just wish there were more double bass coming from the drums, it didn’t feel as heavy as the rest of the sound.

The second half of this EP, the Jekyll to its Hyde, is melodic post-rock that tickles your ears and shows you what Mountains Under Oceans meant by Duality. Their take on post-rock isn’t too twinkly or stereotypical in any way, but it’s gentle enough to earn the label. It’s pretty and layered enough to keep any listener interested in their sound. The more I listen to this half, the harder it is to find any fault in it. I almost prefer this half to the first one, it’s so good.

This EP is strong enough to survive the cliché and deliver an excellent and varied sound. Most of the time, I secretly scold bands for releasing EPs when I believe they’re too impatient to release a full album. EPs are typically brushed to the side as they don’t give the listener as much bang for their buck as LPs do, and they don’t usually make as big a splash as full albums do. But this time, I’ve been proven wrong. This is a beautiful exception to the rule.