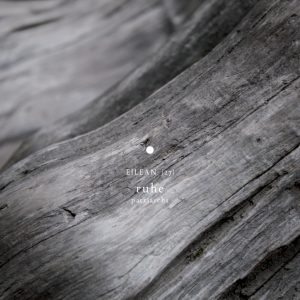 Might it be just coincidence but the word ‘ruhe’ means “rest” accorfing to Wikitionary. And Bryan Ruhe released an ambient work Patriarchs for “all who yearn for rest”. The album itself sounds retro-mood with specific old vinyl noises and the sounds of belt put onto the record. The entire play is based on a piano canvas with added drone and noises. All that summed up makes particular, intimate and atmospheric soundscape.

The first track ‘Towering’ takes you somewhere at early 20s with unpretentious piano sounds. A noise fragment wedges into the canvas making imaginary time travel. Title-melody ‘Patriarchs’ is touching and warm 3 minutes long etude with Bryan singing at the end of it. ‘The ones who were here before, pillars standing the test of time’ works like meditative song or lullaby. The modified voice is rasping as if belonging to an aged person.

Singing and vocalizing are supposed to have the same effect on the brain as meditation – a harmonizing one. The next track ‘Felled’ has great male chorus singing that you want to follow while listening to. The choir gives a sacral taste to the material. Indeed this track captivates and even sends shivers.

Diligent and clever, ‘Guide’ is next with an extremely tranquilized and subdued theme.

‘Shelter’ is probably not even a song but the soundscape to the place where you are listening to the record. The rainfall sound canvas only has some keyboards and intricate noises added. Loads of music box-like fragments invade the natural sound. Then comes vocalizing like speaking toys. Apparently childhood is the asylum Bryan described in that musical theme.

Opposed to all the previous tracks ‘Restoration’ sounds very contemporary with irregular deep beats at the beginning. Featuring Japanese musical experimentalist Nobuto Suda the track gives an impression of spontaneous studio jam when separate players suddenly start matching in their motives. The piano dominates but no doubt the acoustic balances it and harmonizes the whole work.

The ending work ‘Beams’ puts you into a summer’s night outside the city with animalistic sounds. Discrete single keys are like lights of distant stars on a deep black sky. A few guitar tweaks make visible the presence of a person. Still the sound fades into crickets’ noise leaving you in the nature.

The whole album leaves an impression of visit to an little old town with all its peculiarities – green areas, soul-rising spaces, authentic households. That little musical journey is worthwhile for everyone.