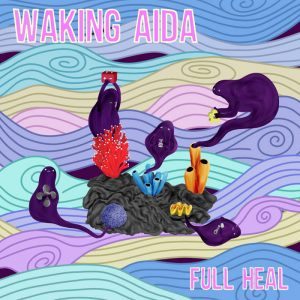 Post-rock is generally a genre steeped in slow, thoughtful and introspective music. It’s a place where heavyweights such as MONO, Godspeed You! Black Emperor and Sigur Rós weave sorrowful melodies that bring tears to the eyes of many a listener. I say generally because there are exceptions to this. Recent times have seen happier, “lighter” post-rock emerge. Solkyri’s Sad Boy’s Club and Cleft’s Bosh! both ditch the melancholy undertones that are present in so much of the post-rock catalogue. Full Heal is a welcome addition to this group of albums.

The latest from Waking Aida (I love the band name, as a sidenote. Optimistic, yet born out of a tragic story), Full Heal is great. That’s the crux of it. It’s better than their last album, Eschaton, which was good, but failed to be anything special.

But what makes it so fantastic? Well. Full Heal is amazing at being an album. It’s consistent, with each of the 8 tracks sounding similar enough to be from the same project (which they are, so that’s good), but also different enough to stay fresh. There are distinct changes in style every time the track changes. It never feels samey, and it takes you on a journey: not in a gimmicky concept album way, however. Full Heal goes full art house movie on the journey theme.

The opening track ‘Exploding Palm’ is aptly named, for it does just that; explodes. Two seconds into the album, and it grabs you by the ears. Power chords in the truest sense of the word. From there, guitar reminiscent of Cleft’s style of play breaks away, leading the track forward. It’s playful, and it’s easy to imagine children in the background laughing away (this may be in part due to the actual laughs of children in the track). This is where the “palm” part comes in. It’s a summery track, and it sets the mood of the album perfectly.

‘Blue Shelled’ (Mario Kart anyone?) continues this trend, but brings a change in style. The tambourine-fuelled intro segues into a lone guitar, which is the vessel for the melody, and light drums keep the tone happy. ‘Higher Fives Than You’ll Ever Be’ follows, bringing a stronger, slightly less dreamy sound. A deeper guitar grounds the piece, providing a nice contrast to the rest of the track.

‘A Sort Of Calm’ offers a change of mood, as well as style. Violins accompany subdued picking, and it slows the pace of the album down. It’s the sombre track of the album, and the juxtaposition with the happiness of the previous tracks is very effective. ‘Fume’ is simply a masterpiece. Beginning with a Caspian-esque intro, it utilises electronics and distortion to chop the instruments. It’s very clever, and sounds fantastic.

Following on, ‘Jilted Surfers’ is a quieter piece, distinctly drum-led, with plucked guitar giving it a light feeling. The back half of the track has MONO-like vibes, but without the classical element. I’d say it’s the weakest part of the album, not quite on par with the rest.

Finally, the ending couplet. ‘Day-Glo Forest’ and the titular closer, ‘Full Heal’, are again brilliant. The former builds from nothing, layering chimes and cymbals under a great guitar riff, which explodes to a crescendo. It calms, becoming moody and thoughtful, before the piano emerges. The remainder of the track is powerful, with tight drums allowing you to move to the beat. ‘Full Heal’ (the track, not the album) is a sublime closer. Equal parts energetic and introspective, rounds the journey Waking Aida has taken you on in a unique way. It’s reflective, combining styles of previous tracks into its own. The instrumentation is beautiful as always, and there’s a deeper meaning to be felt.

Overall, Waking Aida have returned stronger than ever with their sophomore album. It’s complex, hopeful, and above all, fun. Full Heal is truly a joyful effort, and to craft something so enjoyable to listen to is a masterful achievement. In a genre dripping with melancholy, the optimistic 48 minutes you spend with Waking Aida is something very special.