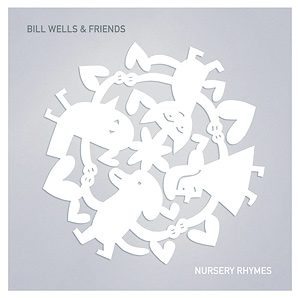 These lo-fi indie nursery rhymes,
Drop a better beat than you’d hear from Grimes
There’s pianos and drums and heavy bass
There’s strings and singing all up in your face.
Bill Wells is the jazz man who had a plan
to recruit a load of singers, woman and man
and re-imagine old favourites with melody and flair.
To be fair to the man there’s not many who’d dare
and he’s pulled it off with a certain success
though the rhymes sound dark and may cause distress
From Humpty Dumpty to Three Blind Mice
Bill’s hit a double six with this role of the dice.

Okay, that’s enough of that carry on. To the album, which is – as the crude attempt above testifies – an album reworking popular nursery rhymes. The premise is intriguing. Bill Wells, Scottish jazz maestro (most widely known among the contemporary crowd for his two incredible albums with Aidan Moffat) came up with a plan to twist and squeeze an array of popular nursery rhymes in order to reveal their dark side. And dark they are – as well as funny in parts.

Upon its release, Wells commented: “Ultimately, part of the remit of a nursery rhyme was to give your child some of the harsh realities of life, while sugar-coating them with a catchy little melody. But I’m losing that coating and going straight to the nub of the thing.”

Not half. He attracted a crack team of indie royalty to aid him on the way, including Isobel Campbell (who wouldn’t want to hear her sing ‘Rock a Bye Baby’?), Norman Blake, Deerhoof, Yo La Tengo and many, many more.

This is album unlike any that have gone before it. The songs are instantly familiar (to most), but scored in such a way that many confuse.

Yo La Tengo kick things off with a riff-infused Three Blind Mice, sung by Karen Mantler which is funky as hell. ‘Humpty Dumpy’ (again with Yo La Tengo, this time accompanied by Amber Papini) is a curiosity. It’s borderline frightening, with cutting strings and shivering guitars backing Mantler’s primal vocal.

Not every track is pulled off with such aplomb. Syd Straw’s take on ‘Oranges and Lemons’ is forgettable, and Michael Servers’ ‘Hot Cross Buns’ falls as flat as his vocal.

But then there’s the gorgeous ‘Lavender’s Blue’ with Norman Blake and Georgia Hubley sounding like a jazz Vaselines, and of course there’s Campbell singing ‘Rock a Bye Baby’ as if she was born to – lush, sultry and daring “down will come baby, cradle and on.” This is serious stuff, and it is accompanied with a beautiful piano section. Another stand out is Annette Peacock’s ‘Hey Diddle Diddle’, muted trumpet and piano hitting prohibition-era heights.

All in, Wells has had a bold idea and his execution of juxtaposing these dark rhymes with simple, elegant arrangements.