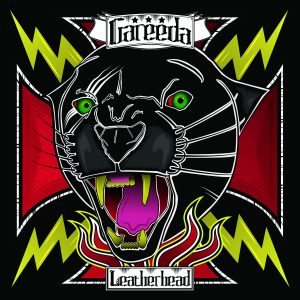 More often than not there is no real need to reinvent the wheel. Just make damn sure the one you’re creating is more than awesome! Gareeda are a power trio out of Edinburgh that manage to do just that. They are a hard rock band, taking heavily from the stoner/desert rock genre and quite proudly wearing their influences on their sleeves. But instead of just churning out clichéd riffs and nineties throwback licks, Gareeda manage to bring a modern twist to the genre. Nothing huge, but one that is bloody effective. The knowledge of their instruments and effects coupled with their refreshing use of vocal harmonies brings a good seventies rock vibe to the overall feel of the album, which makes it sound familiar yet somehow remains surprisingly fresh. I hate name dropping, but think Kyuss meets The Who.

Leatherhead is the band’s first effort as a three piece. The whole album kinda plays out like a live gig. It is a rocking affair, the production is sincere and raw throughout. Track number one, ‘Rats in the Walls’ starts out solid enough, rock and roll straight up. Yet by the three quarter mark, as all live acts tend to do, they’ve warmed up and found their stride and the whole album truly steps up a level.

These are guys who have done their homework. Each band member is not trying to bring something new to the table. They are however, aiming to excel at what they do. You can hear the pride each member takes in their own sound and this in itself is what makes the album so cohesive and powerful. With the changeover from a four to a three piece, they have taken the time to master each members’ respective role in the band. Toni and Michael’s harmonies are a perfect fit to Stu’s solid vocal efforts. As he is also the main riff wrangler, Stu chugs out effortless licks and monster wails with ease as Toni clears your bowels with a guttural low end. All this held concretely together by Michael’s solid sticksmanship. He hits the tubs relentlessly yet with a simple finesse that is often lacked in today’s rock bands. The tracks where he steps up to the mic are a great change of style, as he adjusts his drumming to suit. Along with his rawer vocal approach this gives us a solid, more grunge than stoner feel to the songs. All still dynamically matched by the other guys harmonies which really are the highlight throughout the album.

The Scottish trio’s album is a rock-solid and punchy effort. Cleverly laden with dynamics and harmonies which can only make the aforementioned influences they wear on their sleeves super stoked. An awesome trip for your aural cavities, get on it!!