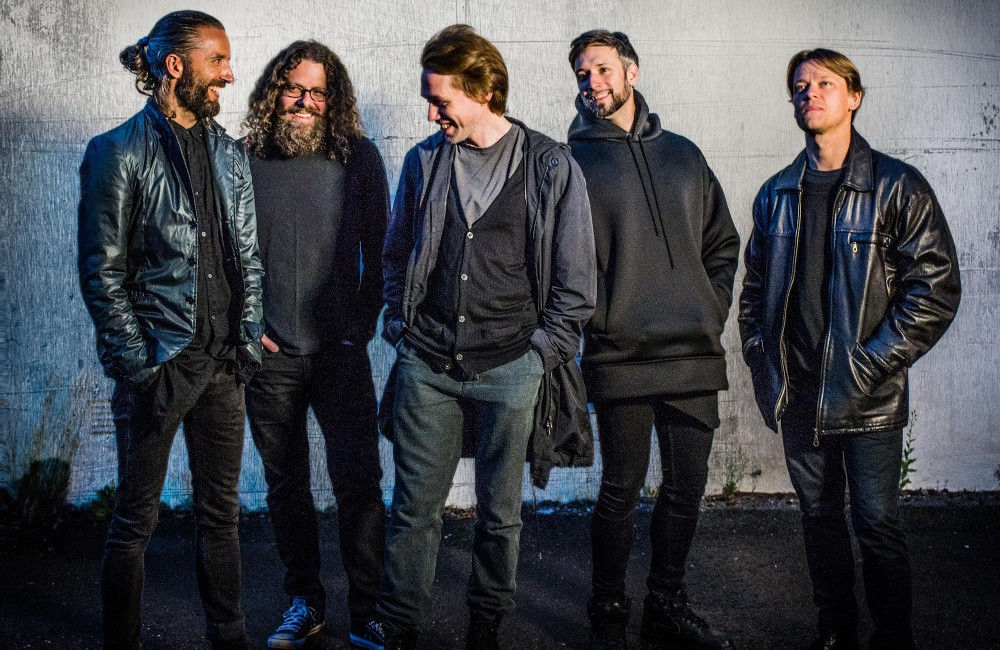 Ahead of their first ever Australian tour, singer Jonas Bjerre of Danish band Mew talks to Gilbert Potts about getting older, about being young, about fans, and about giraffes.

Jonas: Good, I just came back from a US tour, just came home yesterday. It was great, it was really wonderful. We had a lot of fun and we didn’t really know what to expect cause we’ve been gone for so long, but we had a turnout we were happy for. Everyone is smiling and enjoying it so much.

(((o))): You’ve been around a while – do you have both older and younger fans at the shows?

Jonas: Yeah, it’s quite diverse the age group of people that come to our shows. We have some really, really young kids and got some people who I reckon have been fans for many years. It’s really cool, I like that because I like to think that our music appeals to people of a certain mindset more than people of a specific age group. So that’s really cool.

(((o))): Does that maintain your enthusiasm?

Jonas: Yeah, definitely. I mean it’s weird especially when you’re a band like us who takes such an immense amount of time making each album and you kind of get lost in it somehow and you sort of lose perspective a little bit and then when you come out and you play it to people and you get the response kind of face to face, it makes a lot of sense then. I think that’s when you regain your faith in everything because it’s obviously, it’s not easy taking so long on a project, it’s not something we mean to do, but it just always taking a long time.

Jonas: I don’t know if it’s because we’ve gotten older, but I have a sense now in the band that from everyone on the tour bus that everyone is just really, really grateful to be there and to be able to play to these crowds. It is a privileged life, it’s a weird life in many ways because you have to spend such a long time away from home and you have to really kind of struggle a bit to stay in touch with friends and family and all that, but on the other hand you get to do what you love doing and you get to make a living out of it, which is such a privilege. I think that more than ever before people really realise that and are super grateful for it.

(((o))): I was interviewing someone who said it felt strange that people come up and say “thanks” because he’s doing what he likes and should be thanking them for being there for him to play to.

Jonas: Exactly, yeah! I totally get that. And it’s still weird sometimes when you walk out on stage and there’s so many people kind of rooting for you and waiting for you to come and I mean, it’s really wonderful. Sometimes I think people forget that when they’ve been in a band for many years and we’re definitely not a band that forgets that kind of thing.

(((o))): Most fans would feel like they know you in some way because they follow you, but you don’t know them. It must be an interesting dynamic when you meet them.

Jonas: I have a feeling that there is a tendency in our fans to… a lot of our fans are very creative people. You can sort of tell from all the stuff happening online, and sometimes they’ll bring you things they’ve made and I think, I’d like to think if people really get our music then we have something in common at least. Because that’s how I feel about music, when the music really means something to me, I feel like, oh this is a description of a feeling or an atmosphere that I know somehow and I’ve just never been able to put it into words or describe it really. But this song describes it for me. And in listening to it, I feel connected to whoever made it because this person must have some of the same feelings that I’ve had and have somehow been able to put it into a song. So it is kind of a form of communication for me.

(((o))): It’s a beautiful form of communication. Music can be enjoyed over and over again, and each time you listen it sounds a bit different from the last time.

Jonas: Yeah that’s another thing, I think the listener, as a listener, you contribute something to the song. You know in a different way than when you watch a movie, some movies maybe, but for a movie, the story is kind of set in stone to a higher degree than if you listen to a piece of music. I think that when you listen to music you can sort of make it your own. Especially if it’s not too sort of specific, I mean if a song is very specific, then it leaves less room for interpretation obviously, but if it’s very free then you can make it your own, you can use it for whatever you want and I like that idea because in that way I feel like the music keeps growing in the minds of other people.

Jonas: We actually talked about that the other day, and I think one thing I miss about myself is when I was a kid I’d go into a record store and I’d just like put on records from whatever, if the cover was interesting to me or something, and I would just, there would be room for anything inside of me like no matter what it was I would find something appealing in it almost. And now I think my mind’s a bit more closed off.

That’s something I’m working on, exposing myself to more things cause I used to do that all the time. I mean, when I was 14 myself and the guitar player went and watched Eraserhead by David Lynch. It’s a long and tough film to watch when you’re a kid, but we just sat through it and I think that exposing yourself to things that you might not immediately understand is something that you kind of lose a little bit with age, and I think that’s something you gotta keep working at. Because otherwise your mind will start just closing up.

So that’s something which we try and do more and more, but as for the band, I think in the beginning the band was just really, everyone was so thrilled that we could make this noise together and when you get older you obviously put bigger demands on your work, it has to be more than that. So it gets harder and harder to satisfy yourself, musically. That can be tough sometimes, but I think it’s a necessary thing if you wanna keep growing and expanding the quality of what you do.

(((o))): How did that play out when making the latest album, + –? How much was influenced by the past and how much the desire to try something new?

Jonas: It’s very influenced by what we’ve done before and I don’t know why that is, I think, we didn’t really conceptualise it, we didn’t put a framework around it, we just decided to write a bunch of songs and choose the best ones, and the songs really just came what seemed natural for each song, so you know it’s a very diverse album. It’s got a lot of different elements and it kind of visits everything that we’ve done before as well, there’s definitely a lot of new things on it that we haven’t done before, but there’s also aspects of previous work on it.

I don’t know why that is, I think it’s just the place we are in our lives and having Johan come back in the band, I think he brought some of that, some of the influence from the earlier records that he was part of. So it’s a funny body of work, but it really works. I mean, it’s been really well-received and we are super excited about it. And it’s such a pleasure playing the songs live as well on this record.

(((o))): The contrast in + – feels so important. You have for example, all these layers and complexity, but it sounds so light and joyous.

Jonas: That is very important, the contrast, and there’s always this kind of duality in our music I think, even if it’s a very uplifting song maybe the lyric will have a very sombre outlook on life or at least deal with a difficult thing and I like that mixture, I like that juxtaposition between something that might be really sort of inviting and kind of just envelop you, but then there are things inside that you might not see at first that speaks to you in a different way.

(((o))): Some fans can get a bit annoyed when a band changes their sound on an anticipated album.

Jonas: Certainly, and I remember when And the Glass Handed Kites came out, that was before this Facebook thing, but we had a forum on our website and I remember people really not dealing well with the first single. They thought it was way too much hard rock, they thought it was too sort of too hard, and then a few months after everybody, well not everybody, but it was much more accepted. I think our fans are people who are able to put their mind around other things. We’ve been quite lucky with the people who follow us. They’ve been quite tolerant with the changes.

(((o))): So finally you’re coming to Australia. It’s not unusual for us to wait 20 years for a band to come here and we get a bit excited about having visitors.

Jonas: I’m really happy to go to Australia. It seems like a lot of years of waiting for both for our fans there and for us as a band, and it’s going to be my first time ever in Australia so I’m really excited about it. We’ve been very close to being able to arrange shows before, but it just never worked out logistically, so very, very relieved that we can finally go and super happy with people that are being patient with us.