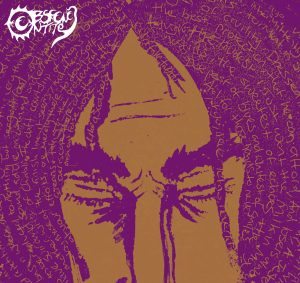 Released on November 27, 2015 via Tridroid Records

Obscene Entity are a UK death metal band that released their debut EP in 2012. Lamentia is their first full release that will be available from November 27th. The album begins with the song ‘Planetary Devastation’, which starts off with a distorted melody before we get some snare as the drum eases its way in before it unleashes its furious barrage at the listener. The vocals are what you would expect from death metal though they are occasional black metal screams and growls thrown in as well to add variety. The guitars are heavy throughout as the songs grinds it way to a conclusion.

The next song ‘Hymns of the Faithless’ is even heavier than the previous track, but is similar in style and structure. ‘Black Blood’ is not as heavy and is more melodic than the previous two tracks in the first half of the song then gets much heavier as the song carries on. ‘Euphoric Vanity’ continues this before ‘Disassembly of the Ego’ gives us a break from the mayhem with a haunting melody and some clean guitars to lead us into the second half of the album. The title track ‘Lamentia’ follows this by being much heavier than before as the band wield a sledgehammer at the listener to ensure their attention hasn’t wandered during the albums breakdown and this onslaught carries on throughout the rest of the album.

Lamentia is a great album that uses death metal as its base, but mixes in elements of black metal and grindcore that gives the album its own brand of extreme metal mayhem, that fans of all three genres should enjoy.