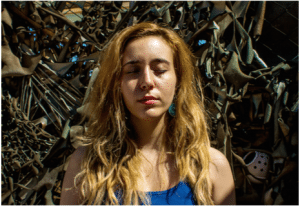 Ipek Gorgun is an electronic music composer and a Ph.D candidate of Sonic Arts and has performed in Tokyo as an opening artist for Ryoji Ikeda’s “Test Pattern No: 6” and joined Otomo Yoshidide for a collective improvisation project.

As a bass player and vocalist for projects such as Bedroomdrunk (avant-garde rock) and Vector Hugo (electro-acoustic), she also performed in an opening gig for Jennifer Finch from L7 and Simon Scott from Slowdive, as well as performing live with David Brown from Brazzaville. Besides group projects.

‘Bloodbenders’ is the first single from her new album Aphelion which will be released on February 16th 2016.