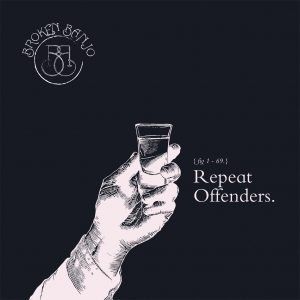 Released on December 7, 2015 via Bandcamp

Medway-based trio Broken Banjo blend the fury of punk with the raw melancholy of low-class blues, to sound like drinking too much cheap whiskey feels. Their energy, attitude and sordid tales of unrequited lust, perennial poverty and drunken disaffection, fits the Stooges/MC5/Mudhoney mould with the occasional dabble of Mark Lanegan’s early solo stuff, especially The Winding Sheet album. A furious live act, Repeat Offenders captures the band’s visceral power and intoxicating energy. Though buried under layers of sweat and howling rage, Broken Banjo have a soulful core and a mean ear for a hook.

‘Caroline’, ‘Gone in the Morning’ and ‘Hide Your Face’ are typical of the band’s pummelling, shrieking abandon; the latter is particularly brilliant rabble rouser. ‘Birdcage’ and ‘Leros’ shows their more subtle, soulful side, with melancholic lyrics blending with a slower-paced, more bass-heavy blues. ‘Drunk Again. End to End’ and ‘Might as Well Be Hell’ have a more early-grunge feel, though for all the distortion and howling, the lead guitar virtuosity belies the band’s musicianship, making them particularly reminiscent of Dinosaur Jr. Lead-singer Liam sounds like the lovechild of Mark Lanegan and the Cookie Monster; a perfect accompaniment to the thumping drums, intricate bass, and chunky riffs.

While Repeat Offenders is a wonderfully bludgeoning assortment of ragged, dishevelled and ill-tempered songs, there’s a seam of craft and lyrical nuance running through this EP that elevates it far above generic “noise and pounding”.  As ambitious and unique as it is earthy and unkempt, Repeat Offenders is a soundtrack to barroom brawls and morning-after despair…perfect for this festive season.