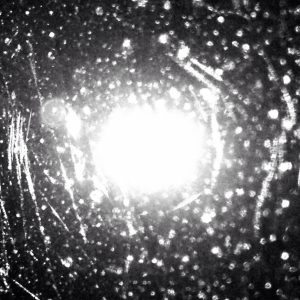 Released on April 7, 2015 via Anti-Matter Records

Take the name of the band literal for a few minutes: Cavernlight. Imagine yourself walking into a large, dark cave illuminated by moonlight, moss sprouting from the rocks and dirt like it’s attempting a dance. See the rocks forming into stout spikes protruding from the smooth wet ceiling and hear that soft watery drip in the background. Close your eyes and mediate here and let the ghosts swirl around you. It’s fleeting and zen-like. An anxiety that also breeds relaxation. That’s roughly what Corporeal sounds like.

If you haven’t heard of the record label Gilead Media, you’ve been grossly missing out (certainly one of the best three out there). The Oshkosh, WI label has been putting out some of the best records of the last ten years (Thou, Yellow Eyes, Fórn, Dead to a Dying World, False to name a few). However, it turns out that label head Adam Bartlett (drums/vocals, the rest of the band are all known by initials) has his own atmospheric doom/drone band. And, like the label, it’s not something you should be sleeping on.

Drone is a genre you love or hate or…just don’t get into. I have a trouble relationship with the beast myself, but it walks a fine line between vein clenchingly intense and/or bo)))ring (there is wiggle room). Corporeal is a strong exercise in intense, even at its slowest. The piece is so stuffed with effective atmosphere it’s amazing they managed to press it on only one cassette.

Kicking off with ‘The Ember that Burns in the Endless Dark’, the cold feeling of a Wisconsin winter is abound (and being from Manitowoc, WI, I’d know). Its like being suck outside on a freezing night looking over a diamond-like post-snow fall. Let’s dispense with these thick metaphors and similes. It’s serene but it’s also viciously and heavy. It bites like the frost. The song vibrates and swoons before getting down to business. When the song really kicks into gear it doomy, it’s got chops. The throaty vocals of either Adam or S (don’t know which) bring feel like they’re coming from the darkness. But it’s only the beginning of the journey.

Corporeal is just beginning when it comes to its ten minute introduction. ‘Wander’ is a song that’s purely ambient/atmospheric. Taking no time to get heavy or give the listener a bludgeoning, it simply works as it says. It’s the kind of thing that makes you feel like you’re wandering. It’s got peace and tranquility, but it’s certainly mysterious in the way it walks.

‘Upon the Threshold of Reason, Embracing Our Corporeal Forms’ is where the band expends most of their aggression. The six minute piece leaves little room for ambience, but still takes its time. Not as slow as something you’d find in funeral doom, but not still not as fast. Like its title, the track makes an appeal to awareness and holds the attention of listeners.

It’s when the album closes off with the whopping twenty-six minute ‘Through the Fog…’ that it may feel like Cavernlight are trying to test you. But there’s really never a moment that it actually feels that way. It’s like the wind in your hair. It passes, albeit slowly. The track is pure ambience and atmosphere with minimalist qualities. It has its serene qualities like much of the rest of the album and it can be easy to feel lost. It is ever changing but its always changing slowly.

This is simply an excellent EP for people who are into doom/drone/ambience/atmosphere/etc. It’s relaxing even when it’s baring its teeth. Overall, the album is a complete experience. It doesn’t feel like it needed to be longer and it doesn’t feel like it’s missing anything. Cavernlight might just be the thing you need during those long, cold autumn and winter nights.