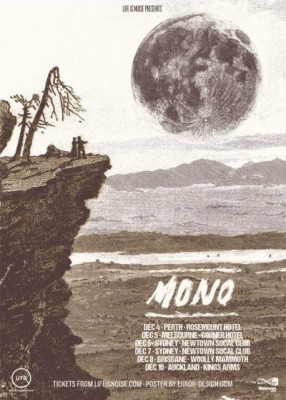 Back before Christmas Alex Crellin, the youngest member of our team, had tickets to see MONO in Melbourne. Due to age restrictions at the venue he wasn’t allowed in to the show but the band kindly allowed him to attend their soundcheck instead, which he reviewed for us.

Melbourne was not usually this hot. Moisture filled the air, which hung over us like a blanket, summoning forth a thin layer of sweat. A Mosquito buzzed past my face, and I flicked a hand across to shoo it away; a small annoyance, but one I was not used to coming from the relative coolness of Tasmania. Constant traffic was another difference, as was the rumble of the train as it passed over the bridge behind us.

I stood outside the Corner Club, shielding my eyes from the sun as I looked up at the board that advertised future gigs at the venue. My uncle stood beside me, a hulking man who had a constant smile on his face and a joke on his tongue. I pulled my phone from my pocket (There was a watch sitting heavy on my wrist, but somehow my phone felt more natural). “4:18” read the digital figures, crisp and white like the device on which they were displayed. My uncle and I exchanged a glance, and he led the way into the pub.

We stepped in, past the security guard who was stationed on the door but not checking ID’s (yet). The air conditioning was on full blast, and I shivered despite the heat outside. My shirt stuck to me, and as we sat down at a small table surrounded by a small army of barstools, I peeled it away from my body. After shifting my weight to empty my pockets onto the table, I settled and took in the room as my uncle went to get a drink. Tour posters and flyers covered the walls of the pub, ranging from modern hiphop groups to obscure 70’s rock bands, to jazz duos from the Bronx. Returning with a pint, my uncle sat down next to me.

He referred to the fact that my second favourite band, MONO, was playing that night at the Corner, and I had tickets to the gig. The catch? I was 17, and the Corner was an 18+ Venue. Thus, no concert for me.

I knew this in advance, of course. The tickets I had gotten through kickstarting a short film that MONO had done the soundtrack to, and I had been in touch with the film company regarding how I could use the tickets. A flurry of emails later, and it had been arranged that, instead of seeing the concert (which was still strictly 18+), I was able to watch the band soundcheck and later meet the band. Which I was very happy about.

However, when trying to organise a time for this to happen, my emails had gone unanswered (I was later informed that they had be extremely busy due to a film shoot, so no love lost there). Hence why my uncle and I were sitting in the pub four hours before the doors were meant to open, wondering what to do.

Time passed ever onwards, and two beers later my uncle suggested we try the stage door, around the back of the venue. A short walk in the heat of the Melbourne day and we arrived at the little alcove that housed the stage door. We walked in, and spied the tour manager, Jack. He was extremely kind and helpful, if a little stressed. MONO was on stage.

The actual soundcheck was amazing. When we arrived, Taka was testing his pedalboard, and the sounds it produced were fascinating. The guitar sounded incredible, with the airy riff from ‘Kanata’ sounding beautiful. Yoda was playing too, a different song, and he sounded great also. Takada was setting his kit up, and drumming away, while Tamiki was lugging the merch across the room. I set myself next to a pole, watching the stage in awe.

After all the banging on the drums and picking the strings to get the levels, they did a quick run through of some of their songs. First, they played a truncated rendition of ‘Recoil, Ignite’, which is my favourite MONO song. And it was beyond words good. The floaty picking at the start of the track evolved into a full on wall of sound, and it was better than I ever could have imagined.

‘Death In Revers’e was next, the latest track from the band, off their split with The Ocean. It sounded pretty amazing, and I didn’t even hear the full track. They followed with short versions of ‘Kanata’, ‘Pure As Snow’, ‘Halcyon’, ‘Where We Begin’, ‘Ashes In The Snow’, and finally, ‘Requiem For Hell’. This last track is new, and not yet released. I can tell you, however, that it sounds brilliant. The drum track is beautifully realised, and works perfectly with the guitars and the glockenspiel. Seriously, I cannot wait to get my hands on the release of this.

The band themselves were extremely lovely. They were polite, and really quite classy. Halfway through the soundcheck, Taka and Takada came out to meet me, and gave a drumstick signed by each of the members (!!!). It was incredible, and a really nice gesture. We had a little chat, and they seemed genuinely surprised that I’d flown up to see them. Afterwards, they were happy to have a photo with me.

They say to never meet your idols, but in this case, I couldn’t be more happy that I did. The whole experience was something that I’ll never forget, and I’m truly grateful to both MONO and the Where We Begin team for allowing me the opportunity to have this wonderful experience. It was a live show like none other, played for a captive audience of two. Next time, I’ll be part of a larger audience, watching them play full length tracks. But that’s for another time, when I’m older and allowed into venues. For now, the memory of one of the best evening of my life so far will have to sustain me.