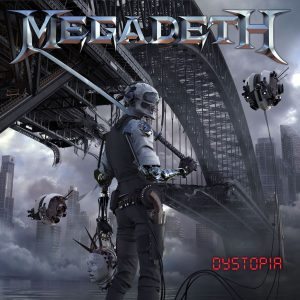 Megadeth main man Dave Mustaine always had quite a reputation for quarrelling with former band members and being outspoken on pretty much everything. The last few years he’s mostly known for voicing the most ludicrous political standpoints, including his infamous remarks on Obama’s birth certificate. Politics aside, Dave Mustaine’s position as one of the most influential guitarists within the metal genre as whole cannot be denied.

His musical output has been less than stellar the last few years. Thirteen (2011) was pretty much a collection of older reworked b-sides and Super Collider (2013) a sad attempt to write an AOR record. It received scathing reviews and it’s by far the weakest album in Megadeth’s discography, along with Risk (1998) and The World Needs A Hero (2001). The band’s latest offering, entitled Dystopia, should be a return to form dixit Dave Mustaine.

Truth be told, Dave’s pretty much on the money there. With the recruitment of Lamb Of God skinsman Chris Adler and former Angra guitarist Kiko Loureiro, he added some serious talent to the band’s ranks. Apparently their arrival rejuvenated Dave’s writing abilities, because Megadeth hasn’t sounded this inspired in several years. This is certainly the case on ‘The Threat Is Real’, ‘Death From Within’, ‘Lying In State’ and ‘The Emperor’. These tracks are classic Megadeth, full of memorable riffs, guitar solos to die for and Dave Mustaine trademark poisonous snarls. They harness the best elements from Endgame and even some faint echoes from the Peace Sells and Countdown To Extinction days.

Sadly, Dystopia has its weaker moments as well. The title track is a dreary mood killer after the thunderous ‘The Threat Is Real’ and the instrumental song ‘Conquer Or Die’ ruins the overall momentum of the album. On the bright side there’s plenty of variation to be found, thanks to Kiko Loureiro’s tasteful playing and Chris Addler’s considerable skills as a drummer.

Dystopia is indeed a fine return to form and it’s quite an improvement compared to Thirteen and Super Collider. However, I wouldn’t call it a classic record in the vein of the earlier mentioned Peace Sells or Countdown To Extinction. But, it’s a solid and thorough effort and a worthy addition to Megadeth’s back catalogue.